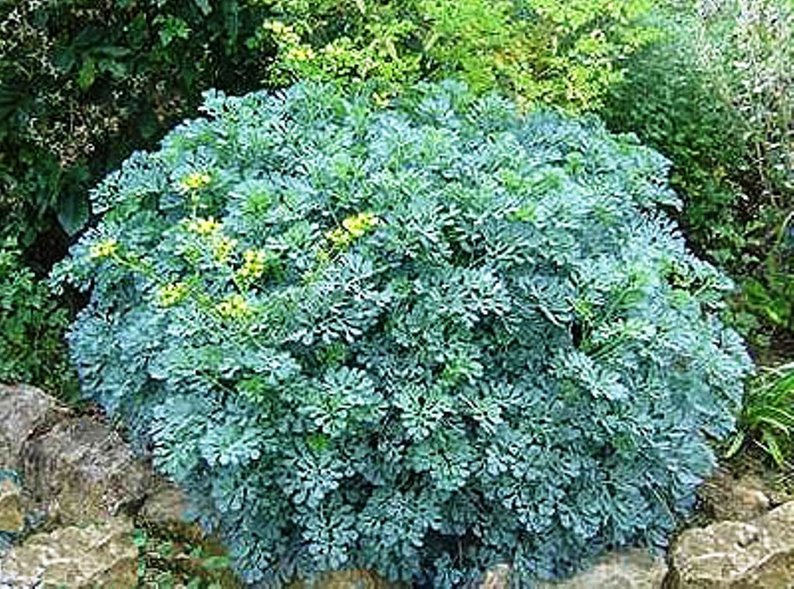 Besides being nice to look at, rue just might be good for your eyes.

Consider, for instance, the fact that ancient Roman painters are said to have consumed great quantities of the bitter-tasting plant, especially in salads. They believed that rue sharpened their eyesight and allowed them to see colors in their true light—a valuable asset, if you’re a painter. And since rue was also considered to be good for digestion, a rue-full salad was probably a good idea.

But as time went on, the idea that rue was good for the eyes took a different turn. In Europe, in the Middle Ages, rue was considered a magical herb. As a witch repellent, a branch of rue was used by the priests as a brush to sprinkle holy water when he consecrated the church for the celebration of the Mass.

But not only was rue helpful in repelling witches and other evil creatures, it was also useful in seeing them when they were disguised as ordinary people. Suppose, for instance, that you are wearing an amulet containing rue. You are walking down the street in a medieval village. Coming toward you, you see a stranger. But by virtue of the rue amulet around your neck, you are able to see into the heart of this person. If he or she is a witch, you’ll know it.

The seventeenth-century English poet, John Milton, knew all about rue and eyes. That’s why, in Milton’s famous poem, Paradise Lost, the angel Michael uses this herb to cleanse the eyes of the sinful Adam. According to Milton, Adam’s sight was clouded when he ate the fruit offered him by Satan. But when the angle bathed his eyes with rue and eyebright (another eye-cleansing herb), Adam was able to look into the future and see the results of his rebellious behavior.

Legendary as this might seem, scientists have discovered that there may be some truth to the old stories. Rue (along with other dark green vegetables such as spinach and collard greens) contains the bioflavanoid rutin. In Germany, rutin has been used experimentally to treat macular degeneration, a disease of the eyes. But watch out for rue. Don’t take it internally if you’re pregnant, for it can cause abortions. And keep an eye on it in the garden, as well. The fresh sap can cause your skin to blister.

But these drawbacks only make rue more interesting. As Adam discovered, the world outside of Eden can be a scary place. A little second sight surely couldn’t hurt.