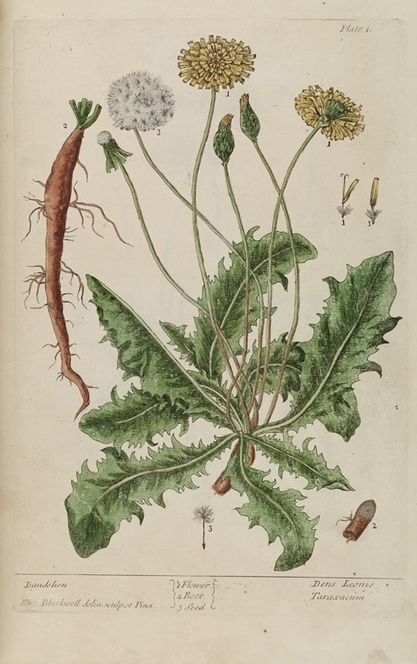 I’ve always loved old herbals–illustrated books that describe plants and their uses. I especially  enjoy browsing through my collection of reprints, noticing how our understandings of plants have changed over the centuries.

Take the dandelion, for instance. Every  year, Americans dump over 90 million pounds of herbicides on their lawns, primarily to get rid of a few dandelions. But until the the last couple of centuries, this plant was valued. It was used as an effctive diuretic to reduce swelling in feet and ankles. Its folkname–piss-a-bed–speaks for itself.

This particular drawing of a dandelion is distinguished in a different way, though. It appears in A Curious Herbal, by Elizabeth Blackwell, published as a book in 1739 in London. (The word “curious,” at the time, meant “careful, meticulously detailed, precise.”)

A Curious Herbal is distinguished because Elizabeth drew the plants from life (in the Chelsea Physic Garden), engraved them  and the descriptive text on copper plate, had them printed and hand-colored. She published them in weekly serial “parts,” four plants at a time, over nearly two-and-a-half years (1736-1739). Then, when all the plates (500 of them, plants and the descriptive texts) had been published as individual parts, she had them published in two volumes, as a book.

Elizabeth, a remarkable woman, seems to have managed the whole thing herself, from drawing and engraving to printing and distribution/ She used her earnings, hundreds of pounds, to bail her husband out of debtor’s prison. She appears to have then gone to work as a midwife, while her husband left her and moved to Sweden, where he lost his head (literally) over a political intrigue in the royal court. Isn’t that an incredible story?

Well, I think so, anyway. That’s why Elizabeth’s story forms the backstory of my current China Bayles project, called Hemlock. I’ve been working on it slowly–everything seems to go more slowly in Covid-time–and have about two-thirds of it done. China (of course: who else?) is asked to investigate the theft of an important and unique copy of A Curious Herbal. The book is also about the theft of rare prints and maps from libraries, which has interested me ever since I read Torn from their Bindings: A Story of Art, Science, and the Pillaging of American University Libraries, by Travis McDade, a few years ago. Sometimes a writing project takes a while to mature–the more complex it is, the longer the maturation. In this one, I’m jugglilng two major stories and a new-to-China setting, so it’s taking longer than usual. Or maybe I’m just getting older, or more picky about paragraphs and even sentences. That could be true, too. 🙂

Book report. The ninth Darling Dahlias mystery, The Darling Dahlias and the Voodoo Lily, will be back from the copy editor soon. Its next stop is the layout editor, who converts the finished Word file into files for print and ebook. The cover is finished but the colors need adjustment; that may take a while, because the cover artist had an accident and is recovering from a concussion! Real life has a way of intruding into our projects, doesn’t it? But it will all be done in time for a late October or early November publication. Hemlock will be done before Thanksgiving, I expect. You should have it in March or April.

After that? Another novella, I think. Would you prefer one in Ruby’s Crystal Cave series? Or in Jessica’s Enterprise series? I write for you, you know.

Home/stead report. It’s been a brutal summer, with nearly two months of straight 100-degree-plus days and no rain. Two weeks ago, an inch of rain cooled us off and turned what was left of the summer grass a brighter shade of green. The Girls took heart and began producing again, after their usual hot-weather layoff. The lake is a puddle and the creek is dry, but October is one of our rainiest months. It would be lovely to get a refill before winter.

We’ve been hunkered down here since the pandemic began and don’t expect to be doing any traveling any time soon. The narrowed focus of our lives has been a blessing, actually. The world beyond has become so dark that it is easier to be content with the small, bright bits of life here at home: an email from the kids, a new book to read, a favorite movie to enjoy again, a pair of does and their quartet of fawns drinking from the water tub by the creek.

Wherever you are, I hope you are safe–from the pandemic, from the fires and smoke, from the hurricanes along the coast and the chaos in Washington. I hope that you, too, can be content with your own small, bright bits, including a few dandelions.

Reading note. “Someone I loved once gave me a box full of darkness. It took me years to understand that this too, was a gift.”― Mary Oliver

52 comments on “A Curious Herbal”