Herb of the Year for 2021: Parsley (Petroselinum crispum)
Flower of the Month for March: Daffodil
March is National Women’s History Month
March Feature: The Notorious Potato

Week 1
March 6. On this day in 1899, aspirin was patented by Felix Hoffman of the German company, Bayer.
March 7. The birthday of American horticulturist Luther Burbank, born 1849. He developed many new varieties of fruits, vegetables, and flowers. A Burbank favorite: the Shasta daisy.

Week 2
March 12. Today is Mrs. Beeton’s birthday. (Your grandmother might know who she was.)
March 14. National Potato Chip Day. 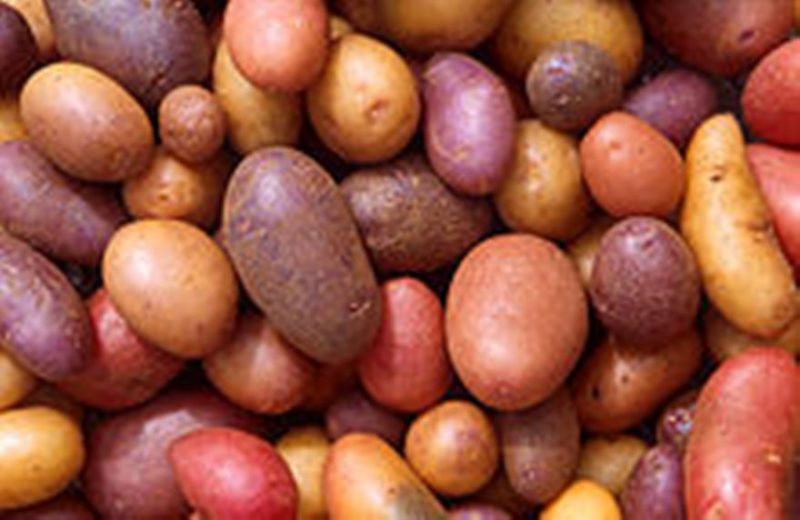 Throughout history, the potato (the notorious Solanum tuberosum)  has had its ups and downs.

In its native Peru, the potato has been a valuable food staple for nearly 8,000 years, and some 4,000 different varieties can still be found there. The Quechua vocabulary included over a thousand words to describe the cultivation and use of potatoes, and “the time it takes to cook a potato” was as an important measure of time. The potato was used as a staple medicine and was believed to ensure fertility.

But when the Spaniards brought the potato to Europe in the 1570s, it was a different story. Europeans were suspicious of the plant, partly because they viewed it as a food for the poor and partly because it produced grotesque tubers underground and reproduced itself from those same misshapen tubers. Surely there was some deviltry associated with this! The matter was settled in 1596, when the Swiss botanist Gaspard Bauhin assigned the potato to the Solanaceae family: the same nasty tribe that included the deadly nightshade, henbane, and tobacco—herbs long used as poisons, narcotics, and (cue spooky music) magic.

But the potato’s prospects brightened again in 1710 when William Salmon, a popular and prolific author, claimed that the cooked tubers stopped “fluxes of the bowel” and could cure tuberculosis and rabies. He also repeated a long-held belief about plants that reproduced themselves below ground: the potato would “increase seed and provoke lust, causing fruitfulness in both sexes.” These claims joined other folk-medicine beliefs: a peeled potato in the pocket could cure a toothache, a dried potato hung around the neck would cure rheumatism, and potato juice rubbed on warts would make them disappear.

The potato rooted itself most firmly and rapidly in Ireland, where by 1800 it was the most important food. Its easy availability led to a rapid population growth, and, when the plant was struck by a blight in the 1840s, to the equally swift deaths of over a million people. In England, the middle and upper classes avoided the potato, as a symbol of Ireland’s unhappy misfortune.

In America, however, the potato was widely appreciated, especially after Thomas Jefferson went to France in the 1780s and gained an appreciation for French cooking. He particularly enjoyed pomme-frites, and when he became president, had them served at White House dinners—the elegant, tasteful French fry.

We mustn’t forget the potato chip, of course. As the story goes, it was invented by George Crum in 1853, when an irate diner sent back the fried potatoes because they weren’t crunchy enough. And I have to wonder what Jefferson would have thought of instant mashed potatoes.

Celebrate National Women’s History Month by finding out who Fannie Farmer was and why she is important. (Hint: How would you like to follow a recipe that calls for “a piece of butter the size of a duck’s egg”?)

Learn about the history of aspirin, first derived from willow bark. Then read about willow bark as an herbal pain reliever. If the subject really fascinates you, you can dig deeper with Aspirin: The Remarkable Story of a Wonder Drug.

Discover Isabella Beeton, the Domestic Diva of her day (1836-1865). She was the most famous cookbook author in British history, and her famous book, Mrs. Beeton’s Book of Household Management, was required reading for every British bride who managed her own kitchen. (In 1913, Beatrix Potter asked for a copy as a wedding gift. At 1112 pages, it was a hefty item.) Also enjoyable: The Short Life and Long Times of Mrs. Beeton.

On the Ides of March, find out what all the fuss is about. Here are some traditional ways to defend yourself against things that go bump in the night–and the daytime:

Take a virtual tour of Luther Burbank’s home and gardens in Santa Rosa CA, and find out what Burbank did to create the Shasta daisy. (You know that the daisy is an herb—don’t you? And you understand why the Scots call it “bairnwort”?) For more on Burbank and his plant breeding business, read Jane Smith’s interesting, informative biography, The Garden of Invention: Luther Burbank and the Business of Breeding Plants.

Cook up some zippy horseradish mustard to go with that hot dog on National Hot Dog Day.

Listen to one of Susan’s podcasts about the lore and magic of herbs. Each one is fun—and you’ll learn something you didn’t know about your favorite herb!