Herb of the Year for 2021: Parsley (Petroselinum crispum) Named by the International Herb Association
Birthday Flower for May: Lily of the Valley
May is National Salad Month
Feature of the Month for May. Sassafras: The Universal Plant

Week 1
May 5: Cinco de Mayo–a day to celebrate Mexican-American culture. Also National Teacher Appreciation Day. If your kids are still in virtual classrooms, you will testify that teaching is a frontline vocation.
May 6: National Nurses Week begins each year on May 6th (National Nurses Day) and ends on May 12th, Florence Nightingale’s birthday. COVID has made us even more grateful to the health-care professionals who work so hard to keep us healthy. Thank you, thank you!
May 9: Mother’s Day. Give your mom a hug–if you’re both fully vacinnated. If you’re not, virtual hugs are sweet. So are flowers.

Week 2
May 10: During this week in 1876, the Philadelphia Centennial Exhibition was opened and sassafras-flavored Hires Root Beer was introduced to a thirsty nation.
May 15: Emily Dickinson, poet and lover of flowers, died on this day in 1866. A favorite line: Forever is composed of nows.
May 16: May cheeses were traditionally made at this time. A favorite French summer cheese was Nettle Cheese, which was wrapped in fresh nettle leaves for ripening.

Week 3
May 19: Canadians celebrate the birthdays of both Queen Victoria and Queen Elizabeth II. Victoria Day is also the unofficial beginning of the warm season north of the border. Canadian gardeners, raise your trowels!
May 20: On this day in 1810, Dolley Madison is said to have served the first ice cream at the White House–strawberry, it is said. Not so: Thomas Jefferson beat her to it, but the myth lives on. For the real scoop, check out this post.
May 23: The birthday of Carolus Linnaeus, born on in 1707. A Swedish botanist, Linnaeus helped us keep everything straight with his binomial system of plant names.

Week 4
May 27: Today is the birthday of Rachel Carson (1907), writer, ecologist, and marine biologist. Her courageous 1962 book Silent Spring alerted the world to the dangers of pesticide poisoning.
May 31: Memorial Day (originally called Decoration Day) is observed on the last Monday in May. Remembrance is symbolized by the red poppy. 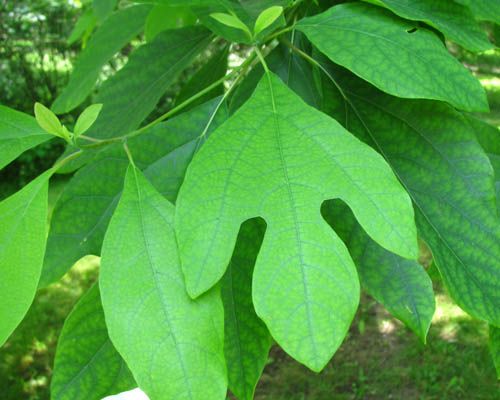 About sassafras: “But the most common and wonderful plant . . . is that which we call the ‘Universal Plant,’ because its leaves when powdered heal wounds of all kinds in a short time.”—Jesuit priest living with the Onondaga Indians, about 1700

When I was a kid growing up in Illinois, my favorite treat was a frosty mug of root beer–back when it was still made from the bark and twigs of the sassafras tree (Sassafras albidum). That tree was also my Missouri grandmother’s favorite picker-upper, which she enjoyed as a strong tea made from a tree at the edge of the woods. Later, when I lived in Louisiana, I learned that Creole filé gumbo just wasn’t the same without filé powder, made from sassafras. And recently, I’ve seen fabric dyed a deep, pretty yellow from sassafras bark. In  more ways than one, a “universal plant.”

The Choctaw word for sassafras is “Kvfi”; in Delaware and Virginia, it was”Winauk.” Some Native American tribes used the leaves as a wound poltice and other parts of the plant to treat acne, urinary disorders, and fevers. The tree was one of the New World’s first cash crops. It made quite a sensation in the early 1600s in Europe, where its medicinal roots and bark were more prized than chocolate and tobacco, two other wildly popular New World herbs. Its popularity plummeted, however, when word got around that it was also being used to treat syphilis (a case of guilt by association). Its main constituent, safrole, has been implicated in liver cancer and the root and bark is now banned by the FDA as carciogenic. Safrole is also hallucinogenic.

Because of concern for safrole’s toxicity, modern root beer is made from artificial flavors, and lovers of sassafras tea have been warned to reduce their consumption. (My grandmother would undoubtedly have gone right on drinking it.) Used in small quantities as a flavoring, the leaves are safe. They’re available, in the form of filé powder, from many supermarkets. If you want to make your own filé, dry the young sassafras leaves until they’re crisp, then powder them. To flavor and thicken gumbo, add the powder at the end of the cooking period, after you have taken the pot from the heat, and add it only to the portion you plan to serve. (Filé powder becomes stringy when it’s heated or re-heated.) Check out this site for more on filé powder, plus some tasty recipes.

Fill me with sassafras, nurse
And juniper juice!
And see if I’m still any use!
For I want to be young again and to sing again,
Sing again, sing again.

Root beer the old-fashioned way. When Hires Root Beer began, the recipe was very much like this one from 1869:

For each gallon of water take ½ oz each of hops, burdock, yellow dock, sarsaparilla [Smilax regelii], dandelion and spikenard roots [Aralia racemosa], bruised. Boil about 20 minutes, and strain while hot. Add 8-10 drops of oils of spruce and sassafras mixed in equal proportions. When cooled to a warm temp add 2-3 tbsp. yeast, molasses 2/3 pint, or white sugar ½ lb. Put the mix into a jar, with a cloth covering it, let it work for 2-3 hrs, then bottle and set in a cool place.

The FDA banned the use of sassafras in 1979, after research linking it to cancer. For another opinion, read this post (and the recipe for root beer syrup).

Introduce Carl Linnaeus to a budding young botanist in your family. Linneaus was the  scientist who created the system by which our planet’s plants are named. A big job that required a giant intellect.

Dolley is said to have preferred strawberry ice cream. Did you know that strawberries were once used medicinally? Read about it in Mrs. Grieve’s Modern Herbal (1929–not so “modern” now). She includes this charmingly fanciful 17th-century recipe for turkey “enfolded in” strawberry leaves and boiled together with every herb to be found in the kitchen garden.

Gather strawberry leaves on Lamas Eve [August 1], press them in the distillery until the aromatick perfume thereof becomes sensible. Take a fat turkey and pluck him, and baste him, then enfold him carefully in the strawberry leaves. Then boil him in water from the well, and add rosemary, velvet flower, lavender, thistles, stinging nettles, and other sweet-smelling herbs. Add also a pinte of canary wine, and half a pound of butter and one of ginger passed through the sieve. Sieve with plums and stewed raisins and a little salt. Cover him with a silver dish cover.

And then . . . dinner, we assume. With the best china and crystal, to match that silver dish cover.

For more about nettles, listen to Susan’s podcast on this much-maligned “weed” or read about 101 surprising ways you can use nettles.