Herb of the Year for 2020: Blackberries, raspberries, and their cousins (Rubus ssp.)
Flower of the Month for October: Marigold
October is National Breast Cancer Awareness Month
October Feature: Chrysanthemum: Not Just for Homecoming

Week 2. National Chili Week
October 12: Indie Author Day at many local libraries and bookstores, celebrating local authors whose books are published by small presses (not the big guys in New York)October 14: National Dessert Day. Also, on this day in 1926, Winnie-the-Pooh was published. (Happy birthday, Pooh!)
October 18: Today is the birthday of herbalist Nicholas Culpeper, 1616-1654. His 1654 book, The Complete Herbal, has never been out of print.

Week 3. Friendship Week (Rosemary is the friendship herb).
October 22: National Nut Day (No, not that kind—think pecans, walnuts, almonds).
October 24: On this day in 1788, Sarah Hale was born. Thank her for Thanksgiving.
October 25: World Pasta Day.

Chrysanthemum: Not Just for Homecoming 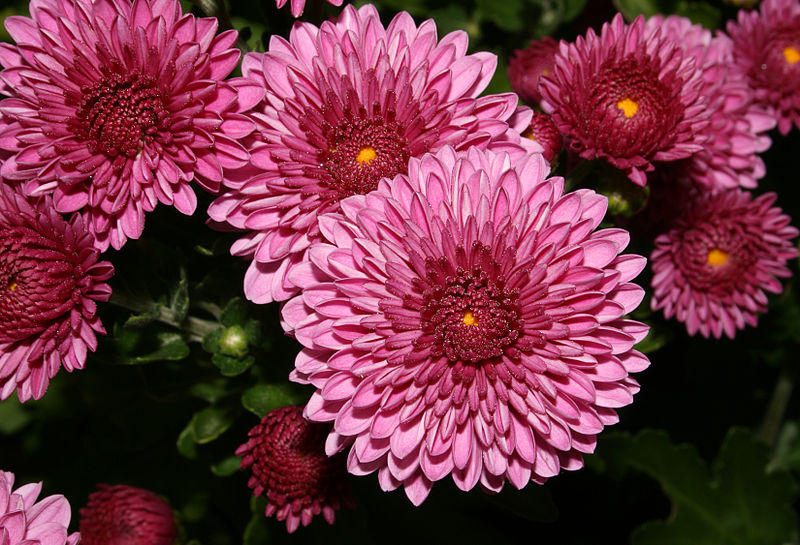 Chrysanthemums have a long history. In China, the plant was cultivated for its beauty as early as 1500 BCE, but it was also valued for its practical uses. A decoction of the roots was used to soothe headaches, the petals were eaten in salads, and a tea was made from the leaves.

In Japan, the Imperial court held its first chrysanthemum exhibition in 910 CE, when the plant was declared the national flower and adopted by the ruling family as its symbol. National Chrysanthemum Day is still celebrated there. For many, the flower typifies the Far East in the same way that the rose typifies the West.

The chrysanthemum came to Europe in the seventeenth century. It was named by Karl  Linnaeus from the Greek prefix chrys-, which means golden (the color of the original flowers), and –anthemon, flower. When it began to appear in England in the late 1700s, it became popular as a bedding plant. Gardeners were taken by its beauty and it never caught on as a medicinal herb.

In modern Europe, the chrysanthemum is often used as a funeral flower and connotes sadness and grief. In America, it is a celebratory flower, conjuring visions of football games in the cool, crisp air and high school homecoming dances–perhaps only a memory in Covid-time.

Chrysanthemum morifolium is the usual culinary chrysanthemum. The dried blossoms are brewed as a tea. The fresh petals, used sparingly, add a pungent zest to a salad or veggies. In China, the  young leaves and stalks are stir-fried with garlic, ginger, and dried chile peppers and served over noodles.The flowers and leaves are used, like sweet woodruff, to flavor wine.  Never use florist varieties, which may have been sprayed.

It won’t be long now. Susan’s new Darling Dahlias mystery will be along later this month. Watch for her email announcement!

Don’t let Chili Week go by without a pot of red simmering on your stove. Lady Bird Johnson (revered for her work in environmental conservation) left us a recipe that some of us treasure with an almost reverential respect. Check it out.

Celebrate Pooh’s birthday by baking a batch of ginger-honey cookies brightened with orange. Great project for the kids.

On Nicholas Culpeper’s birthday, Read Susan’s post on the “People’s Herbalist.” A 17th-century renegade, he believed that people ought to know for themselves how to use the plant medicines available to them, a traditional knowledge that was already beginning to be lost. The Complete Herbal was hugely influential in Culpeper’s era and a window into the uses of plants on the cusp of the Enlightenment.

You may never have heard of Sarah Hale, but you can probably recite her poem, “Mary Had a Little Lamb,” and you certainly celebrate Thanksgiving, the holiday she made famous. Now, through the magic of the internet, you can turn the virtual pages of her famous cookbook and see what American women were cooking two centuries ago. Here are Sarah’s instructions for making herb blends, plus “Rules to be Observed with Pickles.” Flip a few pages and see what else you can find.

Throughout the South, it’s time for pecan harvest. Here in Texas, by National Nut Day, we’re ready to get out the slowcooker and start cookin’ up some Tex-Mex Spiced Pecans—the ones we love to snack on and give away at the holidays.

For National Pasta Day, let’s not dish out the same old spaghetti. Treat yourself to an unusual pasta-and-pea salad, made with a mint-arugula pesto (and maybe a few chrysanthemum petals?) Delicious, different, and quick!

Find out what Susan is up to during these autumn days by visiting her blog, Lifescapes. There’s always something interesting going on in the Texas Hill Country. She also has a book-and-reading blog, BookScapes, where she posts reviews of books she’s read and writes about the fast-changing world of books.