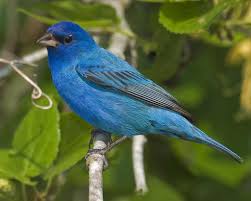 Here in the Texas Hill Country, we have our resident year-round flocks of cardinals, chickadees, titmice, doves, and several species of sparrows. But we’re summertime hosts to two buntings: the Indigo and the Painted. This week, a male Indigo visited the seed trays–the female is probably around, too, but she’s an inconspicuous brown, shy, and much harder to spot. This guy is bluer than blue, a lovely treat for the eyes. We’re on the far western cusp of hisTexas breeding area, so I feel quite privileged to see him. Thanks to Wikipedia for the photo. where I learn that the Indigos often migrate at night, routing by the stars. Makes me feel extra-special, somehow, knowing that their celestial GPS is set for Meadow Knoll.

Homestead report. The baby girls (2 Buff Orpingtons, 2 Rhode Island Reds, 2 Barred Rocks) are big enough to spend their days in the chicken pen, separated from the Big Girls by a bird-net “fence.” Some of them can fly, now, too, and they delight in testing their wings. As soon as the nighttime temp rises to 70, they’ll move to the coop fulltime, and I can clean up the bathroom. They’ve been living in a plastic bin in the bathtub for over 3 weeks. You can imagine the mess. 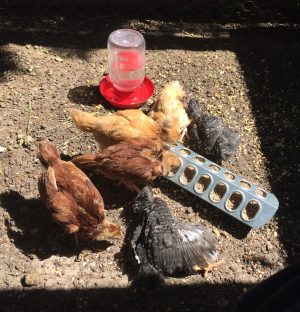 Book report. I  have two projects in the works (a novel and a novella series), but both have been laid aside so I can focus on the new website I’m building, with the help of a WordPress designer and a graphic designer. My longtime webmistress, Peggy, has retired, which means that it’s time to make the big switch to a site I can maintain myself. It will probably mean some changes in the monthly eletter. When I know what I’m doing, you’ll be the first to hear.

Coming soon: the second book in Ruby Wilcox’s slightly spooky novella series, SomeBODY Else. It’s available for preorder on Kindle, Nook, and iBooks, with a launch date of May 14. (Book 3 is finished and ready for a mid-June launch. More good news: there will be an audio edition from Dreamscape, available in 3 releases, August-October.

Print? Perhaps, as a 3-novella set, later this year or early in 2020. But it won’t be hardcover (so it won’t make it to your local library) and it’s likely to be expensive. (Here’s why you rarely see novellas in print.) But you print-only readers will have A Plain Vanilla Murder, China’s 27th mystery, coming in early June. Twenty-seven? OMG. Impossible.

Yes, impossible. But there it is. Fact. And thanks to you for taking this ride with me. It’s been nothing short of amazing.

Reading note. Only she who attempts the absurd can achieve the impossible.–Sharon Schuster (I bought this as a bumper sticker in Berkeley when I was in grad school eons ago. I look at it at least once every day.)

Home in the Hill Country