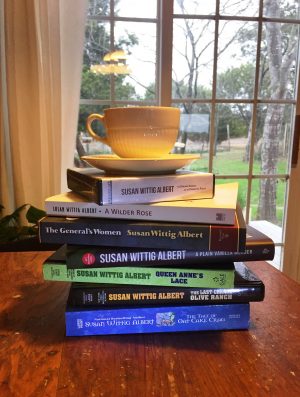 The other day (on Valentine’s Day, actually), a reader wrote to me. Mary is someone I hear from often enough to recognize her name and appreciate her comments. She writes: “I’m so sorry to learn there won’t be a 2020 China Bayles. Is there anything we, China’s readers, can do to persuade a 2020 book?” She goes on to say (in a very nice way) that while she loves the Dahlias, her heart is with China and please let’s hurry things along just a little faster.

Gentle readers, please don’t mistake me. Mary’s is a delightful letter and I was beyond pleased to answer it because it’s such a nice version of the demanding  “WHEN is the NEXT CHINA [or the next Dahlias]?” But it made me think that maybe it’s the right time to share a bit of explanation with you–and a “what-do-you-think” question.

In the old days, when my books were published by my traditional publisher, the answer to “when?” was easy: it was always a year from the date I turned in the manuscript (that’s what we still call the thing, even though it is no longer a manu-script, produced manually, by hand). Say that the due date was March 30 of one year. The book appeared on the first Tuesday of April, the following year. Twelve months, all four editions (digital, hardcover, audio, large-print) at once. Like clockwork. Also like clockwork, the mass-market paperback edition, twelve months later.

That was then. This is now, and because I’m a publisher, I have control of the process.

Let me explain. Last week, I started writing The Darling Dahlias and the Voodoo Lily. Barring major interruptions, I should be able to send the manuscript to the copy editor–Sandra–the first week of June. She will likely be finished by the middle of July, and I will send the edited file to the designer/formatter, Sarah. Monica will be done with the cover in time for Sarah to marry it with her interior files, and by the middle of August, the entire package is done.

At this point (early September) I could publish the digital and paperback print-on-demand paperback editions on all the e-tailer platforms, where most of the books will be sold. The folks who manage the printing and distribution of the smaller library/bookstore hardcover edition will need another six months–say, early January. Ditto the publishers of the audio and large print.

So here’s the question for you. Should I publish the major editions (ebook and paperback) that are ready in September? Or should I hold them until the smaller editions are ready and and publish all five at the same time, in January? Does it matter?

I’ll be interested in hearing your thoughts. Meanwhile, I’m enjoying getting back to the Dahlias. But I can walk and chew gum at the same time, and I’m already thinking about the next China. It will be out sometime in 2021–depending on which publishing calendar seems best.

And Mary, thanks again for that question!

Reading note. Publishing a book is like stuffing a note into a bottle and hurling it into the sea. Some bottles drown, some come safe to land, where the notes are read and then possibly cherished, or else misinterpreted, or else understood all too well by those who hate the message. You never know who your readers might be.― Margaret Atwood

67 comments on “Bookery 101: The publishing calendar”