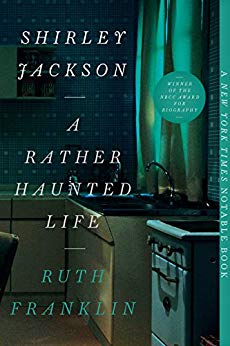 My experience of Shirley Jackson began with her two memoirs, Life Among the Savages (1952) and Raising Demons (1957), both genuinely funny, crisp, and captivating. I discovered them in the early 1960s, when I was a young mom with small children, learning how to write and wanting a career as a writer. In those books, Jackson seemed like a perfect–and perfectly inspiring–model. I met the “other” Jackson–the Jackson of “The Lottery,” The Haunting of Hill House, and We Have Always Lived in the Castle–much later, and found the light and dark aspects of this complicated, contradictory woman very difficult to reconcile.

Biographer Ruth Franklin has made sense of Shirley Jackson for me. In a biography that is detailed and nuanced without ever losing the compelling narrative line, Franklin pulls together all the various dimensions of a multi-dimensional woman who doesn’t fit the two-dimensional world she lives in. She shows us a writer (also a daughter, a mother, and a wife) who is beset by her own personal demons, raised in a culture that can’t adequately recognize or value her uniquely creative vision, married to a man who has to belittle and even betray his wife in order to boost himself, writing for editors and readers who admire her virtuosity but are bewildered by her serious work. Given all these pushing-pulling forces, it is no wonder that Jackson’s creative work takes such complex forms or was so little understood in her lifetime–and rather better understood now.

One of the things I like best about A Rather Haunted Life is the way Franklin sets her subject into her time and place–which were my time and place, as well. Women who were painfully wedged between the fixed gender expectations of the 1950s and the Second Wave feminism of the uncertain 1960s can recognize ourselves in Jackson’s fiction, Franklin says, for it is “nothing less than the secret history of American women of her era.” Jackson’s popular and lucrative comic memoirs bring us the cheery misadventures of a mom raising four unruly children in an endearing old house. Her novels and many of her stories offer a macabre Gothic vision in which girls and women are captured (both literally and metaphorically) by houses from which there is no escape, by families in which there is no survival, by desires for which there is no consummation. Between these poles, Franklin asks, where are women to find themselves? Where, indeed–and hence the conundrums of Jackson’s extraordinary vision.

Franklin’s biography helped me make sense not only of Jackson’s psychological contradictions but of two decades in my own life, my own “secret history,” when I was trying to manage the contradictory responsibilities of mother, wife, daughter, student, teacher, and writer. For that gift, and for its clear and consistent reading of Jackson’s often baffling work and its appreciation of Jackson’s pared-down prose, I am grateful.

Extra: You can read (or reread) Jackson’s “The Lottery” on The New Yorker site.  It originally appeared in the print edition of the June 26, 1948, issue.

22 comments on “BookScapes: Review of Shirley Jackson: A Rather Haunted Life”