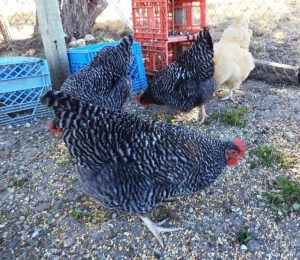 Life in the MeadowKnoll chicken yard is usually serene and uneventful, a welcome relief to the chaos of Covid-time. Our five Girls lead a tranquil life, punctuated only by frequent visits from Mom (me), their regular egg-laying visits to the nest box, and the irregular visits of the bull snakes that like to snack on the eggs. Sometimes they’re pretty urgent about it, too. I’ve seen a hen on her nest and the snake curled up beside her, waiting for her egg. When I find these unwelcome visitors, I reach for the handy snake-grabber that we keep next to the nest box, grab the snake, and deposit him (or her–I have no idea how to sex a snake) in the garbage can to await deportation. Bill drops them off on the other side of the lake the next time he goes to town.

Snakes aside, the Girls’ lives are usually tranquil. That changed recently, when Buffie went broody. Buffie is a two-year-old gold Buff Orpington. She’s not the Chief Chicken in our little flock of four Barred Rocks, but she stands out. And the other day, when I opened the nest box and found her fluffed up twice her usual size, sitting on four eggs, three of which she had filched from her sisters. When I took the eggs, our normally placid Buffie growled and bit me. Hard. And refused to leave the nest box, except a quick run for groceries and water.

Buffie is not a bad Girl. Buff Orpingtons are known for their annual (or more frequent) eagerness to raise a family, so she is being true to her breed impulses. But she’s in for a big disappointment because the eggs our little flock produces are infertile. We don’t have a Rooster. On purpose. I’m told that there are sweet and docile Roosters, but I’ve never met one. Mine have always been unruly, combative, and downright macho. The latest fellow was so fierce that I had to wear boots in the chicken yard to keep from being spurred. So the last few flocks have been Girls only. No Roosters.

Another solution: give Buffie a setting of fertile eggs and let her hatch a brood. Could do–but the current flock is just the right size for the coop and the fenced yard. And a setting would likely produce at least one Rooster. (See above.)

So Buffie was wasting her time, making a nasty nuisance of herself in the communal nest box, and sitting all day in temperatures of over 100. I know that the heart wants what the heart wants (as one of my Facebook friends noted), but this Girl needed to forget about being a mom. So she got to spend time in the Girl’s Retreat, a cage (a live trap) set up on a couple of crates where she can’t claim squatter’s rights on her sisters’ eggs and the moving air can cool her off and break her broodiness. 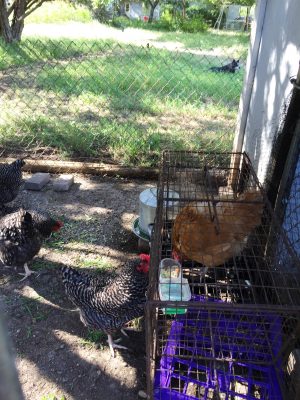 The Girl’s Retreat is stocked with water, food, and some nice little food treats, and it sits in the middle of the chicken yard where Buffie is in the company of her sisters. All she has to do enjoy a few snacks, cool off, and become a Girl again. I’m happy to report that three days did the trick. Buffie is now back to her normal cheery self. She has forgotten all about being a mother, and life in the chicken yard is tranquil again.

Except for the snakes, of course.

Book report. Many distractions (mostly volunteer work for Story Circle, where we’ve been creating a new website). I still have several weeks to go on the current Dahlias project, The Darling Dahlias and the Voodoo Lily. I hope to have it finished so you can have it in October. However, the Enterprise novella trilogy (the second in the Pecan Springs series) will be out in July, so you’ll have something to read while you’re waiting.

Reading note. Who knew what would happen next? Who could guess? That I would fall headlong into a mystery. That I would find myself pulled into the parallel universe that all the other animals exist in, simultaneous with us. In other words, before a couple of days had passed, watering and feeding the chickens, I had fallen in love with them.–Alice Walker, The Chicken Chronicles