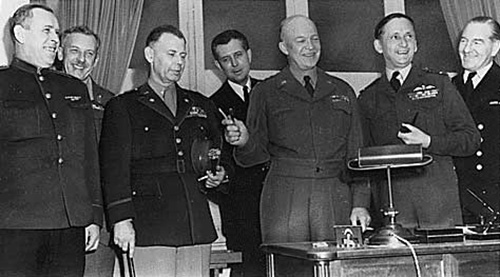 Last week was the 75th anniversary of V-E Day, the day when Nazi Germany formally surrendered to the Allies. It  reminded me of a telling pair of photographs that I dug up when I was doing the research for one of my favorite writing projects: a biographical novel called The General’s Women, about the woman behind General Dwight Eisenhower during World War II. Kay Summersby, Ike’s driver and aide.

Take a good look at the photo above, of Eisenhower holding the two pens used to sign the German surrender. It’s the one that has been published for the past 75 years as the official commemorative photo of the surrender. See that blurred “shadow” just visible behind the head of  Walter Bedell (Beetle) Smith, the general’s chief of staff, second from left? Looks a little odd, doesn’t it?

The explanation for that “shadow” is simple. It’s what was left of Kay Summersby, who was airbrushed out of the picture by the Office of War Information (OWI), which jealously guarded images of the war. As you can see in this unofficial AP photo, she is actually standing behind Beetle Smith in the second row, second from the left: 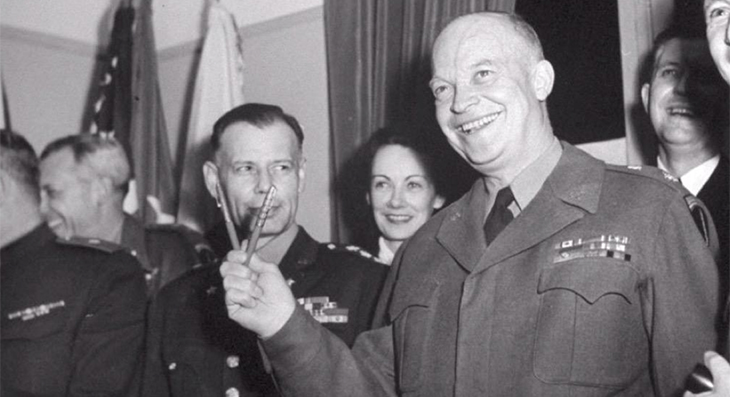 The two photos are a metaphor for Kay. She was an important part of Ike’s life during the war. In fact, as one general put it when confronting gossip about their affair, “Leave Kay and Ike alone. She’s helping him win the war.”

But after the war it was a different matter. Kay was diligently airbrushed out of Ike’s life because she threatened his reputation. She even became a problem in the 1952 presidential campaign, both in the runup to the GOP nominating convention (when Ike was competing with Robert A. Taft for the nomination) and again in the general election campaign. President Truman later revealed the issue: Eisenhower’s letter to his boss, Army Chief of Staff General Marshall, saying he wanted to divorce Mamie and marry Kay, and Marshall’s blistering reply. Ike changed his mind–and changed history.

When I was doing the research on Kay’s story, I found out how that happened and when and why, and what it all meant. I built a fiction around those fascinating facts. More here.

Reading note: Deceiving others. That is what the world calls a romance.― Oscar Wilde

9 comments on “Bookscapes: Brushed Out of the Picture”