Lives change, as I said in Part One and Part Two of my previous posts on this continuing thread. If you haven’t read these, you might want to skip over there first. 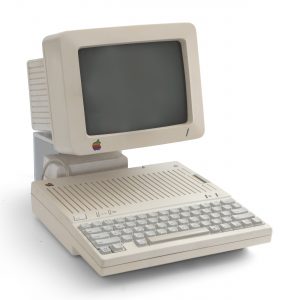 “The tools we write with change the way we think.” Friedrich Nietzsche typed this sentence–or something like it, on the first commercially-produced typewriter in 1882, exactly a century before I sat down to my new Apple IIc and began learning to write with a tool that enabled me to record my thoughts almost as fast as they appeared in my mind. And to revise, recall, reconsider, review, and reorganize what I had written–without the labor of retyping the whole freakin’ page.

Remember how that worked, back in the day? You’d type a page, make corrections, and retype. Then do it again. And again. And again–until you got it the way it was supposed to be or you ran out of time (usually the latter).

But the word processor changed all that, astonishingly. I began, in 1982, with an Apple IIc and then IIe, and Apple Writer. I wrote a half-dozen or more of my early young adult novels on those machines. It was a single chapter to a floppy disk, which meant that the ability to search was limited to about 5,000 words. And I remember losing whole chapters when the floppies disappeared or malfunctioned. Oh, the agony . . .

But primitive as it was then, the word processor was a watershed event in my writing life. What was wonderful about it, of course, was the ease of editing. You could type at the speed of thought, then take as long as you wanted to revise–and revise and revise. Of course, for some writers, the best part of the game is getting it down on the page. But I am a writer whose first drafts are pretty crappy. My enjoyment of the craft arises from the pleasure of making that first stuff better. After decades of typewriters, I adored those Apples.

And then I married a data-processing guy who disliked Apples (on principle, mostly), loved his KayPro, and used both WordPerfect and WordStar–the two non-Apple word processing programs of the day. Since we were writing together and he knew more about computers than I did, it made sense to move to WordStar–which I liked, because all of the commands were keyboarded. No mouse. No fonts choices, either–but back in the day, who cared about fonts? We were lucky to have upper case and lower case. As for printers, the dot matrix with the tractor holes down the side–that was it. Remember?

After 1987, all of the young adult books, the early nonfiction, the first half-dozen China Bayles, and the first three or four Robin Paige mysteries were written in WordStar, on various DOS machines with a great deal more memory than my baby Apples. But even though the books were composed (and revised) on the computer, the publisher still handled the manuscripts as if they’d been typed. We printed the books on a temperamental laser printer and FedExed two copies (at great expense) to the editor in New York. The copyeditor used a red pencil for corrections. I used a blue pencil to correct her corrections. Lots of physical labor, lots of mailing, lots of chances for error.

Then, some time around the turn of the century, the publisher let us know that their computers didn’t speak Wordstar. Microsoft Word was the preferred software. In fact, while it never came down to push and shove, the message from the big guys in New York was pretty clear. We’re using Word here, people. It’s time you switched. That message became unmistakable when they asked for electronic copy and the copy editing and proofing process was moved to Track Changes and pdf files. No more paper and red pencil, no more mailing manuscripts. Nothing on paper now, folks. Pixels only, please.

So I switched to Word, not without resentment. And since pixels can’t be FedExed, we had to get hooked up to the internet (back then, it was the Internet, with a capital I). Which was complicated by the fact that our corner of the Texas Hill Country was not digitally connected to the rest of the world. Which is a whole other story (and another installment).

If you remember your first word processor (fondly or otherwise), I’d love to hear about it. How do you feel about Nietzsche’s claim? Do our writing tools have the power to change the way we think?

Update, 12/20/19. Mary Karen Euler sent me a fascinating note about Jane Austen’s editing, accompanied by a photo. I’m posting it here because Mary Karen couldn’t get the photo to post with her blog comment.

Jane Austen didn’t have a word processor (or Whiteout or even a paperclip), so she used what was handy: straight pins. From a description of her unfinished manuscript, “The Watsons,” comes this:

“With no calculated blank spaces and no obvious way of incorporating large revision or expansion [Jane Austen] had to find other strategies – the three patches, small pieces of paper, each of which was filled closely and neatly with the new material, attached with straight pins to the precise spot where erased material was to be covered or where an insertion was required to expand the text.” 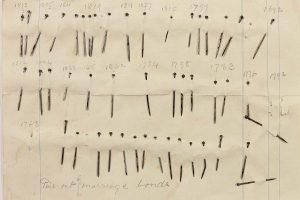 But it turns out that Jane wasn’t the first to pick up her pins when she wanted to make a change. Researchers say that writers were using pins for revision as early as 1617. (Maybe this will help me better appreciate Track Changes?) Big thanks to Mary Karen Euler for sharing this interesting bit about an earlier writer’s editing strategies!

16 comments on “From Typewriter to Word Processor: On Becoming a Writer 3”