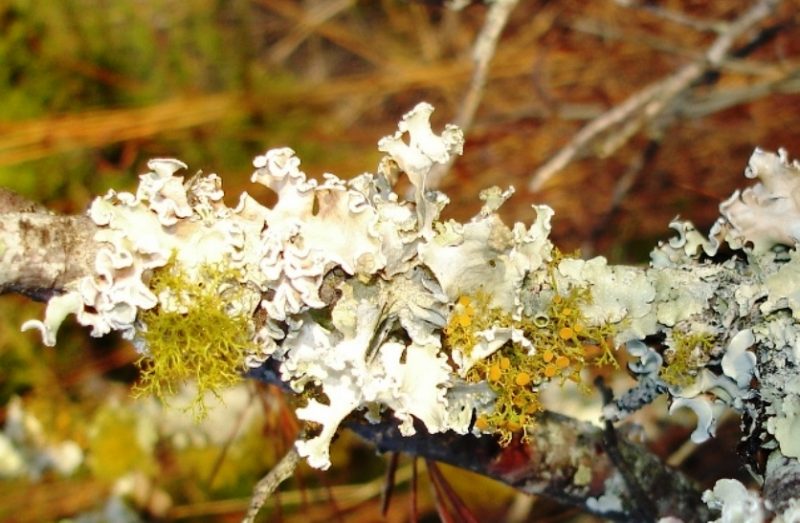 They may be tiny, but they’re beautiful: a landscape in miniature, a tiny garden, so small that they are usually beneath our notice. Which, given the destructive habits of our species, is probably a good thing.

But being tiny doesn’t mean being unsuccessful. Lichens are among the oldest living things on earth. They inhabit every continent on the planet, thrive in every climate, number nearly 20,000 known species. (And who knows how many unknown?) They live in crevices, lurk in cracks and crannies, love dead branches, flower on rocks in Antarctica and in the frozen soils of the Arctic.

Lichens are a betwixt-and-between species: they fill the interstitial spaces in an ecosystem. They thrive in the empty places between this and that. Their microcommunities flourish where being big won’t work and fit sweetly into miniscule spaces from which larger creatures are excluded. Pioneers, survivors, masters of the slow and silent, they are incredibly powerful. Once established–on a rock, say–they set about breaking it down. Imagine that, for just a moment. Lichens are more powerful than the rocks they live on. They are capable of making a difference many times their size.

This past year, we have been overwhelmed by the sheer size of things. The millions of acres destroyed by wildfires in California, the dozens of hurricanes brewed up in the Atlantic and the Caribbean. the uncountable numbers of humans whose lives have been upended in the global pandemic, the stunning size of the egos of small politicians. In a time when forms of largeness darken our global landscape, I need to remember the lichens. I need to look closely at the in-between, celebrate the small, do the little things that might make a difference.

Maybe that would work for you, too.

Reading note What a wild family! Fox and giraffe and wart hog, of course. But these also: bodies like tiny strings, bodies like blades and blossoms! Cord grass, Christmas fern, soldier moss! And here comes grasshopper, all toes and knees and eyes, over the little mountains of the dust.–Mary Oliver

26 comments on “Lichens: Celebrating the Small”