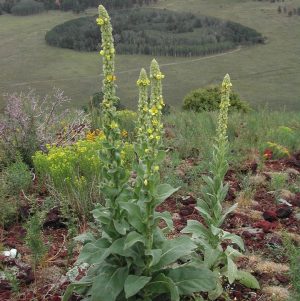 When I was growing up on our little farm in Illinois, he used to pay me a dime an hour to cut this weed out of the fence rows. As I hacked with my hoe, I whiled away the hours by imagining that I might use the plant as a flaming torch to light my path through dangerous forests, or as an enchanted sword to ward off goblins—something like a Jeddi laser sword. Or I might sew an enchanted shirt out of the plant’s flannel-like leaves. As it turns out, mullein has been used in all three of these ways—as a torch, a magical sword or rod, and a piece of flannel cloth.

One of the plant’s Latin names, candelaria, looks back to the Roman occupation of Central Europe, when soldiers stripped the leaves and branches, bound the stems together, and dipped them in tallow to be burned as torches. In England, where the mullein was called candlewick plant, its stringy fibers were twisted and used as wicks for candles. Another old legend has it that witches used lamps and candles made with the candlewick plant—hence another name, hag’s taper. And during the last century, miners in the American West burned the stalks as torches in their mines. They called it the miner’s candle.

What about that magic sword? One of mullein’s most interesting legendary uses is found in the stories of Homer. Odysseus defends himself with a stalk of mullein against the sorceress Circe, thereby avoiding the fate of his men, whom she has changed into swine. And still other folk names for mullein suggest a similar idea. Jupiter’s staff, for instance, and Aaron’s rod—perhaps the magical rod that enabled the Israelite band to part the Red Sea and journey across on dry land? One story has it that the plant was the staff of St. Fiacre, the patron saint of gardeners.

As far as that magical shirt goes, that was just my own private fancy. But the leaves of mullein were once called Old man’s flannel and used as a poultice to treat bronchial illness—sometimes with mustard smeared on them to increase their effectiveness. (Who remembers the mustard plaster?) And the large, fuzzy leaves were just the right size to put into shoes to stimulate circulation and keep the feet warm.

The mullein in my garden makes me think of those hot summer days on that Illinois farm, and my torch, my enchanted sword, and my magical shirt.

What does mullein make you think of?