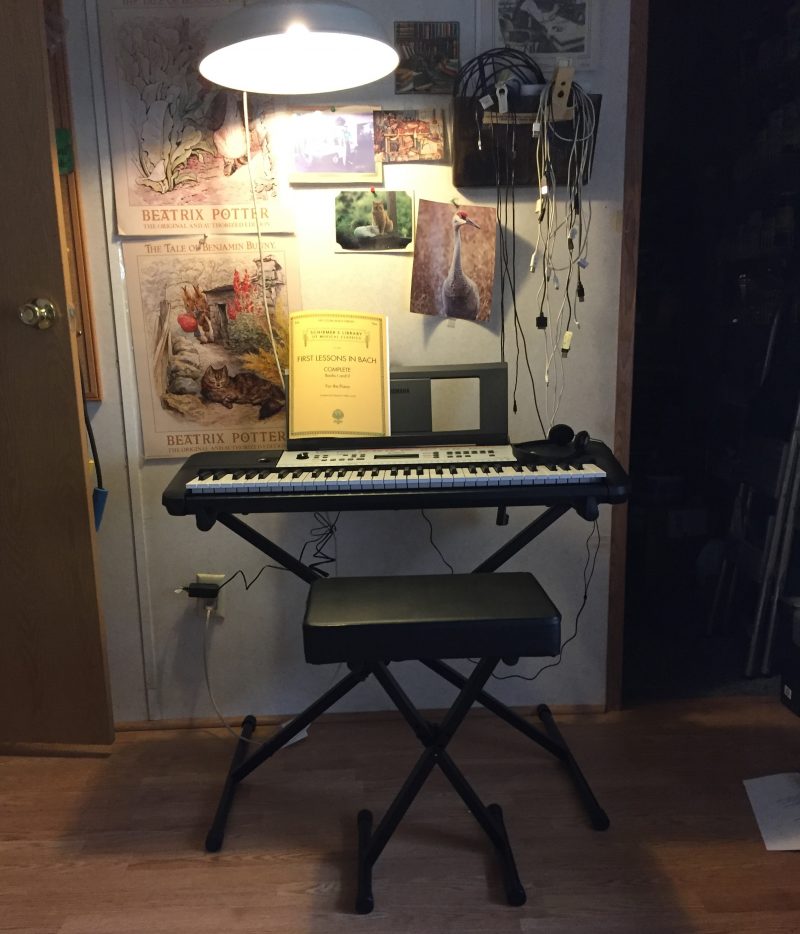 My early Christmas present arrived last week and I’ve been enjoying it enormously–not just for the pleasure of playing again after decades away from the keyboard, but because of the memories. Lots of them.

Like many kids, I started piano lessons when I was eight–not yet old enough, certainly, to appreciate the opportunity. That came later, when I realized that reading music and playing well were important accomplishments. And even later, when I picked up brass instruments in high school.

But I did have the good sense to appreciate–and admire–my teacher, Professor Gruber. We were living in Danville IL in those post-war years, and Prof. Gruber taught at his studio at the corner of Vermilion and North, cattycornered from Walgreens. He cut a distinguished figure on the streets of that small town: tall and slender, with a mane of white hair, round silver-rimmed glasses, a flowing cape, a polished walking stick.  His second-floor studio had the same elegance as his person: a grand piano, an Oriental rug, photographs of his choral groups, always fresh flowers. I was in awe of him, and I did my best to please him. When we moved out to the farm, the only thing I missed about living in town were my lessons with him.

Now, when I sit down at this little keyboard  I think of Professor Gruber. He wore the name proudly: he was the great-grandson of Franz Gruber, the composer of “Silent Night.” How fortunate I was that he taught me classical piano, beginning with the Hanon exercises and moving on to Bach and Beethoven and Handel.

Now, as I go back to the little “Minuet in G” (which still bear’s Bach’s name, even though we now know he didn’t write it) and Pachelbel’s “Canon” and Mozart’s “Turkish March,” I think of him. And imagine him, setting the metronone, sitting down to my left with the small baton he used to correct me, and saying, in his courtly way, “Now, let us see how we get on this time.”

Reading note: There’s nothing remarkable about it. All one has to do is hit the right keys at the right time and the instrument plays itself.–Johann Sebastian Bach

25 comments on “November: Works in Progress”