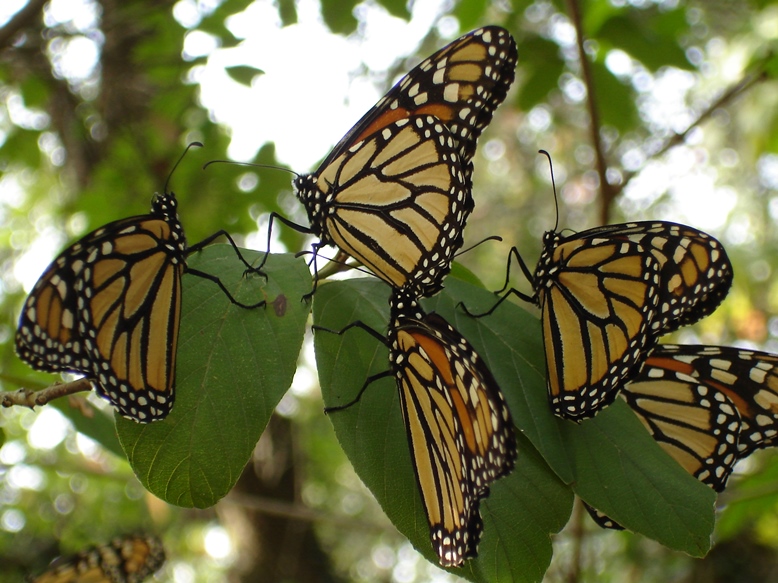 We’re lucky enough to live on the Central Flyway, a bird and insect migration route from the northern Great Plains in Canada down to the Gulf and into central Mexico. The continent is home to so many traveling species. In the spring, the flyway brings birds and butterflies north to their breeding grounds; in the fall, it funnels them south for their winter retreat. Life on the move. Life in flocks, following its instincts.

Sometimes, our migrating friends are surprisingly punctual. For instance, northbound hummingbirds arrive at Meadow Knoll around the Ides of March. One year, I hadn’t yet taken down the winter suet feeder that was hanging from the hook that in summer holds a hummingbird feeder. On March 16, I looked out the window to see a ruby-throat impatiently buzzing the log, looking for his hummingbird hooch. But they’re not all punctual. It’s the end of October and late for southbound fliers, but we’re leaving a bottle up. That’s because one year, a cold, wet tail-end Charlie showed up on November 1 and spent several hours refueling for the last leg of his journey.

Sometimes, we have to listen hard to know that they’re there. A couple of days ago, a cold front breezed down from the north. Riding on it, flying high, came the sandhill cranes. We heard them long before we saw them far overhead, streaming south in a long, ragged V. Their high, wild calls fell on us like a blessing. All I could do was stand and listen, awed by their brave journey.

Sometimes they surprise us, like the year a flock of a dozen migrating white pelicans landed on our little lake–the only pelicans we’ve seen in the thirty-plus years we’ve lived at Meadow Knoll. And there was the southbound white-fronted goose that either got lost or suffered a wing injury. He dropped down onto the front yard to join our flock of Toulouse geesem stayed for a season, and rejoined his northbound flock in the spring. Another visitor: a banded homing pigeon with irridescent blue feathers who spent 24 hours on our front porch and then flew home–wherever home was. He didn’t say.

Sometimes, though we can’t hear them and don’t see them. We wonder where they have gone. For many years, around the middle of October, Monarch butterflies appeared in large flocks in our woods. We now see one or two, even a flitting few–but we haven’t seen a flock for a dozen years now. Have we just not been walking through the woods when they dropped in for an overnight? Do they prefer a different route, another woods? Are there so few now that they come and go without calling attention to themselves? Or have they disappeared altogether? We wonder. And worry.

This year, lots of things are different. This year, Covid19 has changed the lives of our human species. I am deeply, deeply grateful to the many caring people who go out to work in the world so that I, older and at higher risk, can shelter in place. I’m also very grateful that this place where I shelter allows me to see or hear or be surprised by the many travelers who share a small moment of their journey with me. Thank you.

Reading note: Sometimes I need / only to stand / wherever I am / to be blessed.― Mary Oliver

20 comments on “On the Flyway”