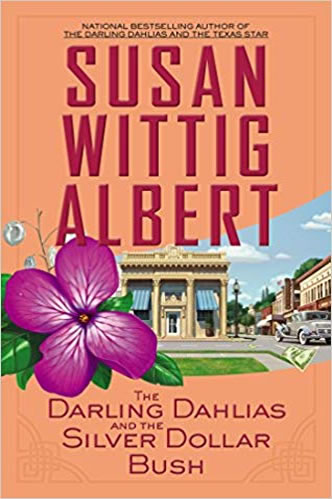 “Readers are going to fall hard for the quirky characters of Darling, Alabama. With a deft touch, Albert draws each character with care so readers can enjoy their eccentricities, worry about their troubles, and cheer at their ultimate triumph.”
—Romantic Times

It’s the spring of 1933 and times are tough all over. The only businessman not struggling is moonshiner Mickey LeDoux, though he still has to steer clear of federal agents. But banks are closing all over the country, and the small town of Darling is no exception. Folks are suddenly caught short on cash and everyone is in a panic.

Desperate to avoid disaster, several town leaders—including Alvin Duffy, the bank’s new vice president—hatch a plan to print Darling Dollars on Charlie Dickens’ printing press. The “funny money” can serve as temporary currency so the town can function. But when the first printing of the scrip disappears, the Darling Dahlias set out to discover who made an unauthorized withdrawal.

Meanwhile county treasurer Verna Tidwell questions whether she can trust Alvin Duffy—and the feelings he stirs up inside her. And Liz Lacy learns that her long-time beau may be forced into a shotgun wedding. Seems other troubles don’t just go away when there’s a crisis. There’ll be no pennies from heaven, but if anyone can balance things out, folks can bank on the Darling Dahlias.


Read Chapter 1 – The Darling Dahlias and the Silver Dollar Bush

“[In The Silver Dollar Bush] the Dahlias band together … trading small favors, bending the rules, and calling on longtime relationships to bring harmony back to their beloved town. With this fifth in the series, Albert again weaves several threads into a story that is both well-researched historical fiction and a suspenseful mystery.
—Booklist

“Readers are going to fall hard for the quirky characters of Darling, Alabama. With a deft touch, Albert draws each character with care so readers can enjoy their eccentricities, worry about their troubles, and cheer at their ultimate triumph.”
—Romantic Times

“Charming characters, a fast-paced plot, and a strong sense of history help make this a superior cozy.”
—Publishers Weekly