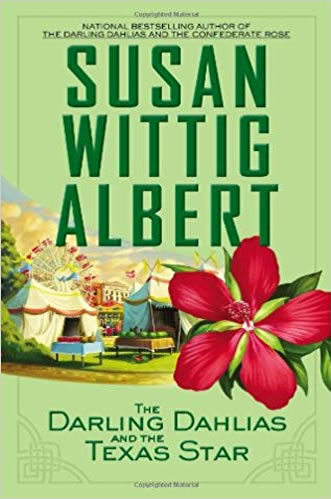 The Texas Star herself—Miss Lily Dare, the “fastest woman in the world”—is bringing her Dare Devils Flying Circus to Darling. Unfortunately, she’s also bringing a whole lot of trouble. As the Dahlias prepare for the annual Watermelon Festival—where they will present the famous female aviatrix with a lovely Texas Star hibiscus—rumors are flying.

Dahlias president Liz Lacy learns from newspaperman Charlie Dickens that Miss Dare has been threatened and her plane sabotaged. The bold and beautiful barnstormer apparently flies high and wide. Is it possible that she’s winging it with the husband of one of Darling’s local ladies?

And speaking of wings, the new cook at Myra May’s Darling Diner can fry a chicken and whip up a sweet potato meringue pie like nobody’s business. But why is she keeping her past such a deep, dark mystery?

As the Texas Star barnstorms into town, Liz and Verna Tidwell offer to help bring down a saboteur who may be propelled by revenge. Before it’s all over, there will be plenty of black eyes and hidden secrets revealed…


Read Chapter 1 – The Darling Dahlias and the Texas Star