Listen to Susan’s Podcast About Ferns 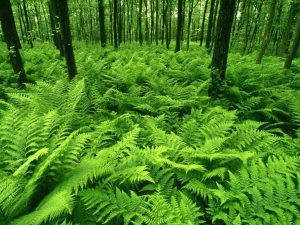 Most of us wouldn’t consider the fern to be an herb. But it certainly fits the Herb Society of America’s definition: “An herb is a plant for use and delight.”

The fern is certainly a delightful addition to our gardens, filling those shady spots, both dry and wet, where nothing else will grow. But ferns have other important uses, as well. There’s plenty to be learned about their secret lives!

The maidenhair fern was frequently used as a medicinal herb. In England, a poultice of the leaves was used to treat snakebite and bee stings. In India and Nepal, a paste was made of the leaves and applied to the forehead to ease headaches and to the chest for chest pains. A tea was brewed and used to treat dandruff and hair loss. Other ferns were used to cleanse the body of intestinal parasites, or to ease digestive disorders. In fact, it’s no exaggeration to say that there was a fern for every human ailment. Read about that, and other medicinal uses for the maidenhair fern. 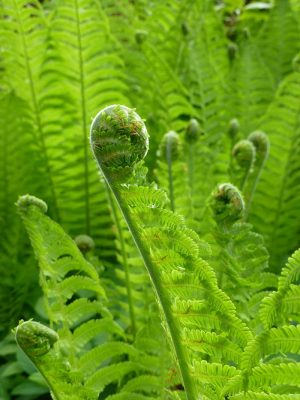 Ferns frequently make their appearance at the table, too. Some ferns push their way out of the soil in tight curls called “fiddleheads,” which are considered a delicacy by many. In North America, it is the ostrich fern that is usually eaten in this way. If you gather ferns from the wild, be sure that you are able to identify them, and that they’re not growing in an area where they may be contaminated by toxic waste. Also, pick only 2-3 fiddleheads from each plant. If you take more, you’ll come back next year and there won’t be a fern!

Learn how to cook a fiddlehead fern

Ferns in Your Garden

Ferns became popular during the Victorian era, when they were used as decorative specimens in atriums, greenhouses and conservatories—and of course, in those gloomy Victorian parlors.

Now, we find ferns everywhere, indoors and out. They tolerate shady conditions that daunt other plants, add a pleasant green color to the garden, and soften the edges of landscaping. Their fronds are graceful additions to bouquets, as well. They’re easy to grow, too. No green thumbs necessary!