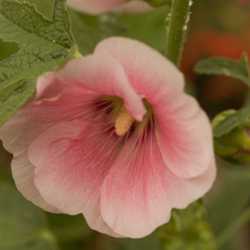 The Hollyhock [Alcea rosea] was once eaten as a pot-herb, though it is not particularly palatable. Its flowers are employed medicinally for their emollient, demulcent and diuretic properties, which make them useful in chest complaints.—Mrs. Maud Grieve, Modern Herbal, 1929

When I was a girl, I loved the frilly hollyhocks that grew along the garden fence on my grandmother’s Missouri farm. I was a bookish kid who loved stories, and when one of my teachers told this story about a special hollyhock, it enchanted me. Now, as a grownup, I still remember it when I see hollyhocks in bloom. And I think about it when I read about the many ways plants have traveled around the planet, finding new homes for themselves and new ways to flourish in new places. A few years back, I included the story in a book. Stories travel, too.

Born on a Georgia plantation, Priscilla had been sold to a Cherokee chief when she was a very young child. A few years later, in 1838, the Indian band was evicted from their homes and forced to take the terrible journey that came to be called The Trail of Tears.

And that’s when fate stepped in to help Priscilla, who by that time was about 12 years old. On Dutch Creek, near Jonesboro, IL, a wealthy Southern Illinois farmer named Barzilla Silkwood encountered the Indians, who were being sent under military escort to Oklahoma. With surprise, Silkwood recognized Priscilla as the very same child, an orphan, whom he had seen earlier working as a house servant on a Georgia plantation. Moved by her plight, he bought her—for a thousand dollars in gold, it is said—freed her, and took her to his inn near Mulkeytown, IL, to join the fifteen other orphaned children to whom he and his wife had given a home. Priscilla lived at the Silkwood Inn until she died at the age of 75 and was buried in the Silkwood family plot. The Mulkeytown folks turned the inn into a museum. You can visit online or on site.

And the hollyhocks? They are a small variety, almost a dwarf, the flowers a dark-veined rose-pink, the leaves dark green. It is said that Priscilla brought the seeds from the plantation where she worked to her home with the Cherokee Indians, and then on the Trail of Tears. When she made her new home with the Silkwoods, she planted the hollyhocks in the garden, where they have flourished ever since. In 1950, to complete the journey, some of Priscilla’s seeds were gathered and sent to the daughter of the chief of the Oklahoma Cherokees, where they were planted around the Indians’ homes—the gift of a little girl who had faith in a flower.

Reading note. The hollyhock arrived in English gardens [from the Middle East or the Orient] in the 1500s. The common name holly [holy]hock . . . suggests that it is a blessed or healing herb.—Bobby J. Ward, A Contemplation Upon Flowers

14 comments on “The Tale of the Priscilla Hollyhock”