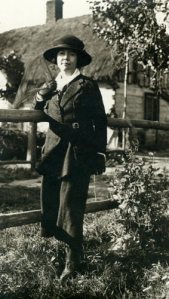 In the first post in this 3-part series, I wrote about why I chose to begin doing research into the life of Rose Wilder Lane. In this post, I’ll continue the story.

When I first learned about Rose, back in the early 1970s, I had no idea that, years later, I would write a novel about her—I was simply curious about her. No, make that deeply curious, for as a child, I had read and loved all the Little House books, which I had been told were written by her mother, Laura Ingalls Wilder. Laura was an iconic figure, in my mind. There was no other writer quite like her.

Then I read Laura’s book, The First Four Years, which shocked and surprised me, since it didn’t seem possible that this not-very-well-crafted book could have been the work of the author of eight beautifully-written and award-winning books. But I discovered from the introduction that Laura had a daughter, Rose, and that—even though her writing career had long been overshadowed by her mother’s— Rose was remembered at least by some as a “famous author” who traveled abroad and wrote a “number of fascinating books.”

This intrigued me, and I began to read and collect Rose’s writings, discovering that she was an accomplished and impressive professional writer with a long string of newspaper stories, feature pieces, travel articles, books, and magazine fiction to her credit. I began to construct a bibliography of all the writings I could find, and added to it whenever I discovered a new article or book.

I also began to construct a timeline of Rose’s life, beginning with her birth on the Wilders’ claim in Dakota Territory, through the family’s move to Mansfield MO, and Rose’s early career as a telegrapher for Western Union, her days as a San Francisco Bulletin feature writer, and her travels across Europe. Her newspaper journalism–mostly feature writing, not hard news–was typical of the era, long on sensation, exaggerated emotional appeal, and a tenuous allegiance to the facts.

This style made her a popular writer, and she had a substantial following. She was also a favorite of her newspaper and magazine editors, who didn’t have to do much editing. She was a prolific writer, and her bibliography from those days (still incomplete, as I write this in 2020) is massive. Her books of that time–biographies of Jack London, Henry Ford, and Herbert Hoover–demonstrated her tendency to invent and exaggerate. She was clearly skilled in turning adventurous lives into even more adventurous fiction, a craft she would hone with her mother’s work in the 1930s and 40s.

This part of the project got a boost around 1978 when I found a privately published booklet by William T. Anderson, “Laura’s Rose.” Although the booklet lacked citations and sources, it provided a general outline of Rose’s life, some details I hadn’t yet discovered (like her walking tour of the Loire Valley in 1921), and a few more titles to look for. There were still a lot of gaps to fill. But because I was teaching and doing other research, my “Rose project” went on the back burner.

I was still deeply interested in Rose, however. So I  visited the Wilder farm near Mansfield, where she grew up. And whenever I traveled through the Midwest and the Plains states, I looked for the Ingalls family’s house sites—not an easy task, in those days before the internet. I also managed to locate some of the articles that Laura wrote for the Missouri Ruralist, which made me even more sure that she could not have been the author—not the sole author, anyway—of the Little House books. She would have needed a lot of help to produce those eight books—and who better to help than her much-published daughter? Meanwhile, a couple of scholars had written articles that also questioned the idea that Laura was the sole author of my favorite children’s books, so I wasn’t alone in my suspicions.  They couldn’t get much traction, though: the story of Laura, the farmwife-turned-famous-author, was the dominant narrative.

And then in 1992, I learned that William Holtz, at the University of Missouri, was about to publish a biography of Rose titled The Ghost in the Little House: A Life of Rose Wilder Lane.  I contacted Professor Holtz, requested an advance reading copy, and reviewed it—enthusiastically—for the San Antonio Express-News. I was fascinated by the depth and breadth of his research into Rose’s life, and I found myself saying an emphatic yes, yes! to his well-documented arguments that Rose was the ghostwriter behind the books that were published under her mother’s name. What’s more, his very complete biography filled in the gaps (most of them, anyway) in the timeline I had constructed of Rose’s life.

But even more importantly, William Holtz had done what every good biographer does: he had laid down a research trail. The notes and bibliography at the end of his book took me to the original sources he consulted: Rose’s letters, diaries, journals, and manuscripts, held in the Herbert Hoover Presidential Library.

And that, of course, was where I had to go next, in my efforts to learn who really wrote those wonderful books—the subject of the novel that became A Wilder Rose.  I’ll be writing about that part of my adventure in Part 3 of this series, Writing a Woman’s Life.

Reading note: You must take into account the actual distinction between truth and fact. It is beyond all human power to tell all the facts. Your whole lifetime spent at nothing else would not tell all the facts of one morning in your life, just any ordinary morning when you get up, dress, get breakfast and wash the dishes. Facts are infinite in number. The truth is a meaning underlying them; you tell the truth by selecting the facts to illustrate it.― Rose Wilder Lane