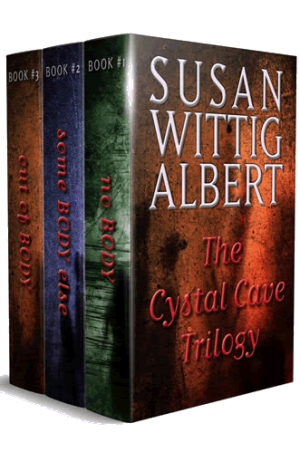 I’m about to send a just-completed trilogy of Pecan Springs novellas (DeadLINES, Fault LINES, FireLINES) to my copy editor. This is the second of these trilogies (the first was The Crystal Cave, and a third is already beginning to take shape at the back of my mind. So maybe it’s time to think out loud about why, as a writer, I like this new-to-me form.

Definitions, to start with.

Novella: a work of fiction that’s longer than a short story and shorter than a novel. Famous examples: The Awakening (Kate Chopin), Turn of the Screw (Henry James), Heart of Darkness (Joseph Conrad). Length: anywhere between about 20,000-40,000 words. Mine tend to be longish, more like 40,000.

Novella trilogy: a group of three connected novellas. The connection can be the characters, the settings, an arcing plot, a theme—some of these or all. The two I’ve written tend to use all of these connections.

Why I like this form. You probably already know that I like to write long. While most mysteries clock in at around 75,000 words, the China Bayles novels are around 90,000. The biographical novels are all over 100,000 words. So why (as a writer) would I be interested in the novella?

Well, to tell the truth, I’m not. Not so much. Not as a standalone, anyway. Short is short, and my writer’s mind wants to keep probing away at a character or an issue or an event, finding out more about her or it or them. (I’m a why writer.) But short is a good challenge for me. It forces me to “write tight,” as one of my teachers used to advise. Good short fiction compresses a big story into a small space, its heavier mass giving it greater intensity (as opposed to the diffused force of a longer novel).

For me, the interesting thing about this is the ability to do more with less. Shorter stories, linked, give us more different angles onto the characters, and more glimpses into what makes them tick.

For instance, in the Ruby Wilcox/Crystal Cave trilogy (NoBODY, SomeBODY Else, and Out of Body), Ruby (a central character in the China Bayles series) has three different adventures. Each new challenge teaches her something new about her psychic abilities and shows her learning how to more effectively use that part of herself. The novellas also introduce a new romantic interest, Ethan Connors, and give him a role in Ruby’s self-discovery. As a setting, the Crystal Cave plays a role, as well: Ruby’s shop is one of the ways she finds herself. There, she can pull together—and explore and showcase—all the unusual  aspects of her personality. In this trilogy, I published the individual titles in ebook; all three titles are available in an omnibus edition in both print and ebook (and soon, in hardcover, for libraries). There are audio editions of each, as well.

In the new Enterprise trilogy, the central character is Jessica Nelson (you may remember meeting er in Out of Body and Mourning Gloria). Jessica is a crime reporter for the Pecan Springs Enterprise, so she has a ready-made franchise for investigations. She also has a lot to learn, especially about the chief tragedy of her own life: the deaths of her family in an arson fire. Central to the trilogy: the overarching plight of the Enterprise itself, which plays a role in each book. Is this newspaper doomed to fail, as have so many other community newspapers in the era of the internet? If not, what (or who) can save it? Big questions for a small town. The individual titles in this trilogy will be simultaneously published (in April 2020,I think) in both print and ebook; the omnibus edition will be available in hardcover for libraries. I’m not sure about the audio editions–more about that when/if it happens.

So what about you? As a reader, do you like the shorter novella form or do you prefer to lose yourself in an absorbing 500-page novel? Do you like linking? If you’re a writer, what challenges do you face in this form? Readers and writers, what suggestions do you have for similar reading? I can’t reply to every question or comment, but when I have something to add, I’ll chime in.