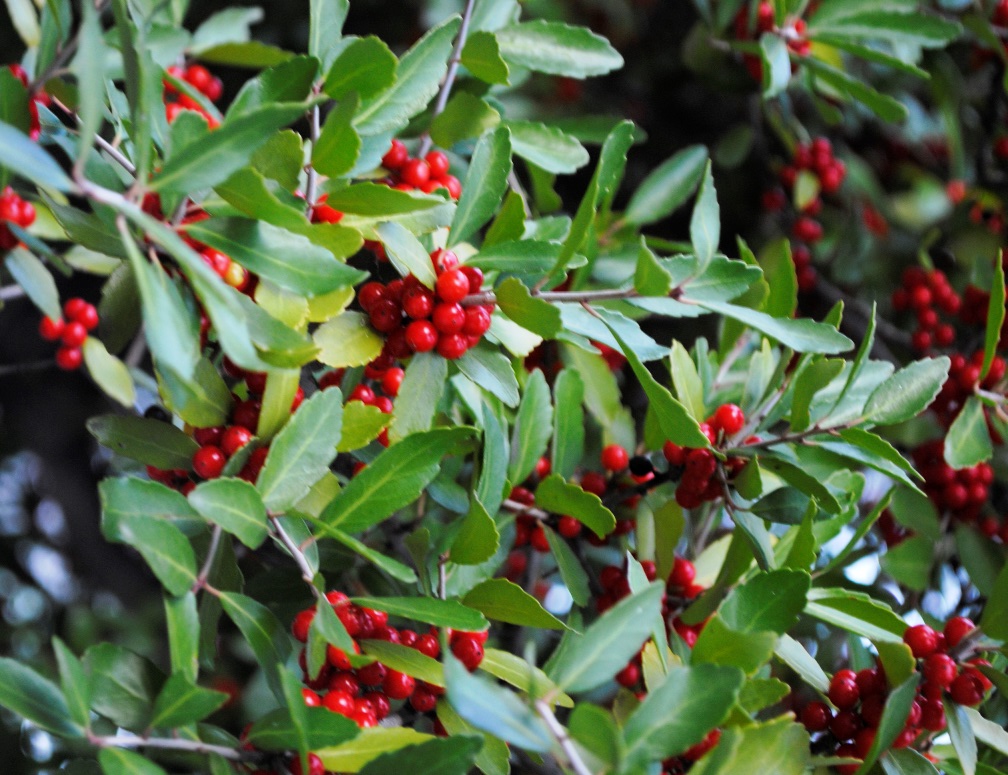 Back in Civil War days in the South, coffee was impossible to get. But that didn’t mean that Southerners had to give up caffeine for the duration. All they had to do was go out to the yard or the nearest woods and pick a bucket of yaupon leaves, dry them, and brew. Voilà! A cup of caff.

The yaupon holly–now a bright, tidy landscaping shrub–is native to North America from Maryland south to Florida and west to Oklahoma and Texas. Its leaves have more caffeine than any other indigenous North American plant. Native Americans knew this, and used the tea both ceremonially and recreationally. In fact, they used it as a ceremonial purge, hence the scientific name, Ilex vomitoria.

In South America, drinking holly tea is a popular cultural hobby, and growing and brewing yerba mate (as the Ilex paraguariensis is known) is a profitable industry. Packages of dried mate are widely available in shops and supermarkets. Drinking yaupon has never caught on in the States, however, perhaps because the old vomitoria practice is still remembered.

Making yaupon tea is as easy as collecting the leaves, drying them (in your oven with the pilot light on), and crushing and brewing them. Sweeten with honey, if you like. The flavor is a little like black tea. While caffeine levels vary (depending on the plant and its micro-climate), it’s roughly comparable to green and black tea.

When you stop to think about it, those of us who can grow yaupon in our yards are lucky. In an era of climate change, coffee (Coffea arabica and Coffea canephora) and tea (Camellia sinensis) may not be long-term sustainable crops. Yaupon, like most hollies, is a stubborn survivor. If you live in Zones 7-9, you can probably grow this shrub.

And produce your own daily cup of caffeine–sustainable caffeine.