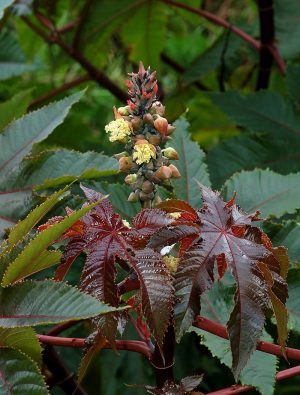 And the Lord God prepared a gourd, and made it to come up over Jonah, that it might be a shadow over his head, to deliver him from his grief. So Jonah was exceeding glad of the gourd. But God prepared a worm when the morning rose the next day, and it smote the gourd that it withered. —Jonah 4:6-7

The plant that grew up to shelter Jonah is most likely the plant we know as the castor bean (Ricinus communis). In Hebrew, it is called Kikayon (קִיקָיוֹן).  It grows rapidly to twelve feet (forty or more in the tropics), with large, umbrella-like leaves up to three feet across that are purple when young, green as they grow older.

The Hebrews used castor bean oil in their ceremonial rites, and it is mentioned as one of the five kinds of oil approved by rabbinical tradition for ritual use. The oil has also been used as a laxative, and for skin ailments such as ringworm and itching, and the Chinese use it in the treatment of stomach cancer. The plant is highly decorative, easily grown from seed and readily transplanted. Because it is very fast growing, you can use it in new plantings, where it will provide foliage while slower plants are getting started. Be careful: the active chemical in this plant is ricin. The dark, shiny seeds are highly toxic if swallowed, but can easily be removed from the plant when they first begin to form. (Commercially prepared castor oil is safe.)