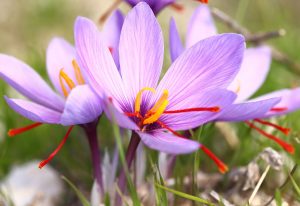 Spikenard and saffron, calamus and cinnamon, with all trees of frankincense… —Song of Solomon 4:14

Today, we recognize Solomon’s saffron as our own familiar fall-blooming crocus (Crocus sativus). In spring, much of the Holy Land is bright with the white, pink, purple, blue, or orange-yellow flowers of over a dozen different kinds of crocus, several of which yield the valuable saffron. This consists of the stigma and upper portions of the style (parts of the blossom), which are collected just as the flower opens.

One ounce of saffron requires four thousand crocus blooms. Without a doubt, saffron is  the priciest spice on the planet–so expensive, it’s usually sold in grams. On the current market, premium quality saffron costs around $1,800 a pound, or about $115 an ounce.

Saffron is used for coloring curries and stews and as a yellow dye. (The Arabic word “zafran” means yellow.) The ancients scattered the precious saffron on the floors of sacred spaces, used it in wedding ceremonies, and mixed it with wine in rituals. In the Orient, it was used as a perfume and sprinkled on the shoulders of guests as they entered a home.

The other plants mentioned in Solomon’s passage are known for their scents. Spikenard is the name of a plant that is used to produce a highly scented ointment. The root of calamus (Acorus calamus) is used in perfumery. Cinnamon is used in making incense. Frankincense is an aromatic resin used in incense and perfumes.