Week 1. Spinning and Weaving Week
October 8: Ancient Romans celebrated Felicitas, the goddess of good luck, on this day.
October 9: A good Saturday to go for a walk through autumn woods and admire the colorful witch hazels.
October 12: Indie Author Day at many local libraries and bookstores, celebrating local authors whose books are published by small presses (not the big guys in New York) 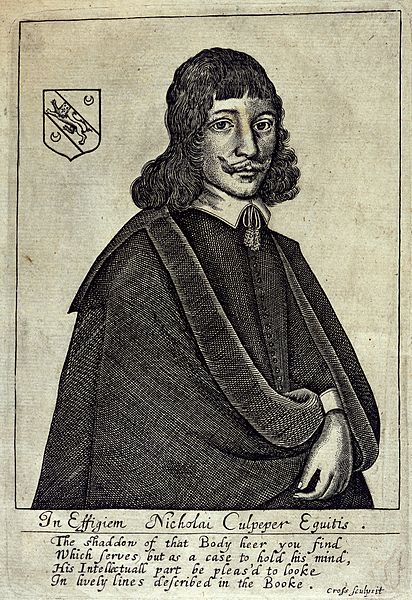 It is a base dishonourable unworthy part of the College of Physicians of London to train up the people in such ignorance that they should not be able to know what the Herbs in their Gardens be good for.—Nicholas Culpeper, A Physical Directory, 1650

Nicholas Culpeper has often been charged with the crime of giving medical herbalism its modern reputation for quackery. Vilified for his opposition to the powerful Royal College of Physicians, he is seen today as a proponent of herbal superstition. But if it had not been for Culpeper, the physicians and surgeons of his time might have succeeded in replacing herbal self-healing with their own “expert” forms of health care, which offered very little relief at very high prices to the victims of their “cures.” In fact, we owe a great debt to this dedicated herbalist, who preserved the traditional uses of plant medicines in a clear and readable way for people of his own time. Yes, there’s a lot of superstition in his work. But it’s also an excellent record of the way plants were used for healing in a pre-scientific era. For historians, it’s a treasure-trove.

Culpeper lived in a time when it was politically dangerous for anyone but licensed physicians to dispense medical knowledge. Trained as an apothecary and motivated by a desire to make medicines available to common people, Culpeper translated into English the Latin London Pharmacopoeia, a closely-held handbook of medical preparations. He published his work as The London Dispensatory (1651), naming and ridiculing the exotic “pharmaceuticals” that the Royal College prescribed: thirteen kinds of dung, the brains of sparrows, the hearts of stags, the horns of unicorns, powdered earthworms, fox lungs, horse testicles. Of one preparation, he says, “’Tis a mess altogether.” Of another, he remarks, “Hundreds are bound to curse such ointments and those that appoint them.” It’s no wonder that the enraged College put Culpeper on trial for witchcraft.

Culpeper followed the Dispensatory with the first English textbook on midwifery and childcare, emphasizing nutrition and cleanliness and recommending herbal remedies for common problems of pregnancy and childbirth. After that came The Judgement of Disease, a handbook of self-diagnosis, and then his most famous work: The English Physician. The book listed the medicinal uses of plants found in the garden, hedgerow, and field, and indexed these to common illnesses, using astrological terms that his readers understood. He recommended “simples” (medicines made with just a few readily available plants) rather than elaborate compounds made with hard-to-get ingredients, and wrote his formulas in a readable, humorous style. He sold his book for a mere three pence, so that even the poorest could buy a copy. And they did, in droves. The English Physician was an immediate bestseller and became enduringly popular. It has appeared in more than 100 editions in the 350 years since its first publication. It has never gone out of print.

It’s here! If you’ve been waiting for the paperback edition of Susan’s latest Darling Dahlias mystery, your wait is over. The Darling Dahlias and the Poinsettia Puzzle is now available on Amazon.

Create your own special celebration of the Roman goddess Felicitas by making a list of the good fortune you have experienced in the past month. If you’re not feeling so lucky, here are a few herbs that might help.

• Allspice promotes luck, health, and happiness.
• Chamomile is the gambler’s lucky herb. In Rome, gamblers washed their hands in chamomile for luck.
• String nutmegs, star anise, and bits of sandalwood in a lucky necklace.
• Plant hen and chicks (Sempervivum) on your roof to bring good fortune (and ward off bolts from the blue).
• Still down on your luck? Try thyme, rosemary, spearmint, honeysuckle–and cross your fingers.

Here in Texas, it’s time for pecan harvest. So by National Nut Day, we are fully prepared to get out the slowcooker and start cookin’ up some Tex-Mex Spiced Pecans—the ones we love to snack on and give away at the holidays.

Find out what Susan is up to during these autumn days by visiting her blog, Lifescapes. There’s always something interesting going on in the Texas Hill Country. She also has a new blog, BookScapes, where she posts reviews of books she’s read and notes on the fast-changing world of books.