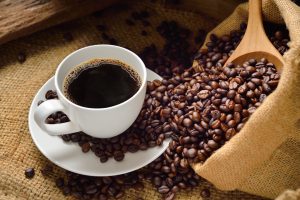 Yes, of course it is!

We’ve been drinking coffee in the West for only about three hundred years, but people in the Middle East began drinking it centuries before that. Legend has it that a Yemini shepherd watched his goats nibble reddish-brown berries from a bush and then leap and dance, having a high old time—a caffeine rush, no doubt. The shepherd told his story to a monk, who (having fought off drowsiness during many long prayers) knew a good thing when he heard it. He boiled the berries in water and before you could say Starbucks, he was pouring cups of dark, rich mocha for himself and his fellow monks, who were also aware of the virtue of staying awake.

Whatever the truth of the legend, this herbal beverage spread quickly from Africa through Arabia and Egypt, gathering converts wherever it was brewed. It was considered medicinal and used as a stimulant, diuretic, a treatment for headaches, muscle aches, and general debilitation. Over the years, coffee was recommended as a treatment for asthma, fever, colds, flu, constipation, menstrual cramps, and congestive heart failure. It was also used as a ritual drink, and a great effort was made to keep its growth and means of production a commercial secret—to the extent of killing anyone who dared to export it.

But the secret got out, and by the late 1500s, coffee merchants were peddling coffee beans in Europe and harvesting enormous profits, while coffee houses were springing up on every street corner. The market for coffee, along with a better understanding of coffee botany, led to speculation. The Dutch, the French, the English, the Spanish, and the Portuguese began to colonize the tropical regions of Asia and America, aiming to grow this profitable herb. Wherever it was grown commercially, the crop’s success depended on slave labor and the slave trade, leaving a continuing legacy in the production of coffee.

Too much coffee can lead to nervousness, irritability, and the jitters. Just enough, a useful stimulant. Always important to remember: coffee’s dark side.