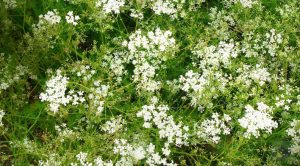 When he has leveled its surface, does he not scatter dill, sow cumin, and put in wheat in rows and barley in its proper place, and emmer [awned wheat] as the border?–Isaiah 28:25

Cumin (Cuminum cyminum) is the same plant that many people grow in their gardens today. It is an annual member of the Parsley family, and is easily grown from seed. Plant it where it is to grow, and when the seeds are brown, harvest and let them dry. The seeds are used in curry powder and for flavoring.

Cumin is originally native to the Mediterranean and has been cultivated for centuries. A cache of the seeds were discovered at Tell ed-Der, an ancient city that stood north of Babylon in the second millennium BCE. During Biblical times, cumin was an important economic crop in the Middle East. Those who grew it were supposed to pay a tax (a tithe) on the yield.