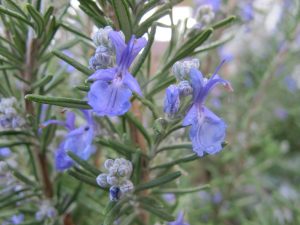 Rosemary, an evergreen perennial with an invigorating pine fragrance and delightful versatility, has been a favorite of gardeners through several millennia. It was among the first herbs used by humans; the needle-like leaves have been found in caves inhabited ten centuries before Christ.

Fresh or dry, rosemary lends its memorable taste to meats, vegetables, desserts, and drinks. Medicinally, it is reputed to strengthen the memory, relieve headaches, treat rheumatism. The herb is a powerful antioxidant and preservative—a fact which was obviously known to the Egyptians (who used it to make mummies) and to the sixteenth-century author of Banckes’ Herbal, who wrote, “Make thyself a box of rosemary wood and smell it oft and it will keep thee youngly.”