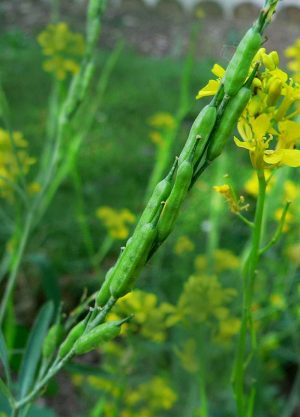 It is like a grain of mustard seed, which a man took and cast into his garden; and it grew, and waxed a great tree; and the fowls of the air lodged in the branches of it. —Luke 13:9

Most commentators agree that the mustard Jesus refers to in these passages is the ordinary black mustard (Brassica nigra). The plant was cultivated in Palestine, probably for its oil. Mustards usually grow only three to four feet high, but fifteen-foot plants have been reported in the Mid-East, with stems as thick as a man’s arm. When the plant is in seed, birds often settle on it to feed. Mustard may have been among the bitter herbs eaten at Passover.

Black mustard is a hardy annual that grows well even in poor soil. Sow it in spring in a sunny spot. The young leaves may be added to salads or cooked and served as a potherb. Pick the seed pods before they are entirely ripe, or they will shatter and the seeds be lost.