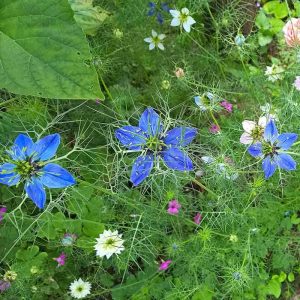 Doth he not cast abroad the fitches and scatter the cumin?…For the fitches are not threshed with a threshing instrument, neither is a cart wheel turned about upon the cumin; but the fitches are beaten out with a staff, and the cumin with a rod. —Isaiah 28:25 & 27

There has been a great deal of confusion about the identity of “fitches.” Now, Biblical botanists agree that the plant described above is nigella (Nigella sativa), once called the “nutmeg flower.”

Nigella is an annual plant with finely-cut green leaves, delicate blue or white flowers that resemble cornflowers, and dainty five-celled seed pods that contain tiny black seeds, once valued for their peppery pungency. The seeds were sprinkled over bread and cakes and were used for flavoring curries and other dishes in the Mid-East, where they were often called black cumin.

Nigella grows wild throughout the Mediterranean area. Its seeds were harvested by spreading cloths under the plants and, as Isaiah reports, by striking the fragile dried pods with a stick to dislodge their seeds. Nigella is grown as an annual in all parts of North America. It reseeds readily, so plant it where you would like to have more of it (and be prepared to weed it out). The blue flowers are a delicate accent in the spring, and the pinkish-purple seed pods may be used in dried bouquets and wreaths. Be sure to save some seed for cookies and curries.