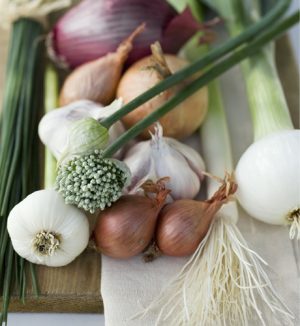 We remember the fish, which we did eat in Egypt freely; the cucumbers, and the melons, and the leeks, and the onions, and the garlic. —Numbers 11:5

The virtues of the three most familiar of the Allium family—onions, garlic, and leeks—were well known in Biblical days. Onions and leeks were said to grow wild in the deserts around Cairo, and all peoples of the Middle East remain fond to this day of the strong flavors of all three plants. The onions known to the Hebrews were probably the Egyptian onion, which produces many off-setting bulbs at the root and forms bulblets at the tip of the flowering stalk. The bulb of the leek is different from that of the onion and garlic: it is slender, and more than six inches in length. Both leaves and bulb are eaten.

Garlic (Allium sativum) is probably the most common seasoning in all Mediterranean countries, where it is often eaten raw with bread. The plant was valued as a form of currency and provided to slaves building the pyramids as an incentive to good work. The first recorded work stoppage in history is said to have occurred in Egypt when there was not enough garlic for the workers! Garlic has traditionally been used as a health aid, to regulate blood pressure and cholesterol.