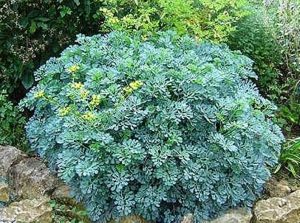 Woe unto you, Pharisees! for ye tithe mint and rue and all manner of herbs, and pass over judgment and the love of God: these ought ye to have done, and not to leave the other undone.. —Luke 11:42

Ordinary garden rue (Ruta graveolens) is the plant referred to in Luke. This shrubby, multi-stemmed perennial grows two-three feet high. Its deeply cut leaves are an unusual blue-green color, and it has small yellow flowers. The plant is native to the Mediterranean area and grows wild in the Holy Land, where it is common on the hillsides.

Rue has a peppery, bitter taste and was used for seasoning. It may have been one of the bitter herbs of Passover. The early Greeks considered it medicinal, and it has been regarded through the ages as an antiseptic and a preventative against contagious illnesses. By New Testament times, rue was tithed, which indicates that it was cultivated as a crop and subject to taxation under Talmudic law.

In many cultures, rue was used as an abortifacient. A old Scottish saying suggests that a little rue goes a long way to protect a young woman’s reputation (in more ways than one): Rue in time is a maiden’s posy. It was likely understood that the word time is a homonym for thyme, also an abortifacient.

In your garden, rue will be a striking accent plant, particularly if you use it as a low hedge. But be wary. The leaves contain photoactive chemicals. If you brush sap on your skin and then expose that area to sunlight, you may be badly burned. You can propagate rue by dividing an existing plant or by seeding it in the spring. It prefers a limey soil.