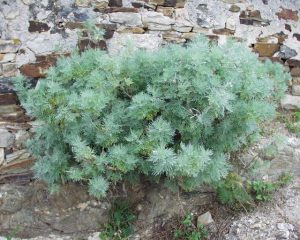 But her end is bitter as wormwood, sharp as a two-edged sword. —Proverbs 5:4

He hath filled me with bitterness, he hath made me drunken with wormwood… —Lamentations 3:15

Bitter-tasting wormwood appears frequently in Scripture as a symbol of repentance, punishment, and suffering. The general term “wormwood” refers to a number of plants belonging to the Artemisia family that have been used over the centuries in medicines and liqueurs. Most are bitter or have a strong scent.

The wormwood that appears in the Bible is thought to be Artemisia arborescens or Artemisia judaica, while the verse in Lamentations is thought to refer to Artemisia absinthium. This plant has been used to make the intoxicating drink absinthe.