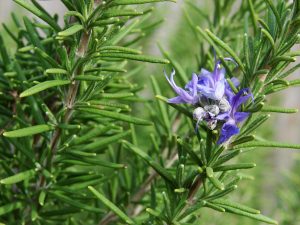 Thousands of years before refrigerators, people who lived around the Mediterranean noticed that rosemary leaves kept fresh meat from spoiling. About the same time, over in Egypt, embalmers began using rosemary to make mummies. These demonstrations of the herb’s ability to preserve led people to believe that rosemary could also preserve memory. Which is why Greek and Roman students wore garlands of rosemary when they studied for exams.

It wasn’t long before the plant became associated with memories themselves. A funeral wreath included rosemary as a sign that the living would always remember the dead. Rosemary in a bridal bouquet, on the other hand, symbolized the couple’s life-long remembrance and honoring of their wedding vows.

During the Middle Ages, this association with the wedding vow transformed rosemary into a love charm. If you got tapped by a rosemary sprig, there was no way out: it was love until death. So by the late sixteenth century, when Ophelia hands Hamlet a rosemary sprig “for remembrance,” Shakespeare’s audience knew that Ophelia was hopelessly in love with him, and that his rejection meant her death. The plant was irretrievably linked to love and death, and to the eternal recollection of both.

All folklore, right? Maybe not. Today we have our own modern, more scientific explanation of rosemary’s ability to preserve. It turns out that plant contains powerful antioxidants which slow the cell breakdown that causes decay and spoilage—antioxidants so potent that rosemary extract is now being used as a replacement for chemical preservatives such as BHT and BHA.

Other scientists have found that these same powerful antioxidants also help to slow the breakdown of the neurotransmitter acetylcholine in the brain, and may retard memory loss in early-stage Alzheimer’s victims. One American herbalist even suggests that the traditional rosemary rinse that makes your hair shiny may also help you remember to buy shampoo.

So there you have it—rosemary, an ancient herb for a new world.