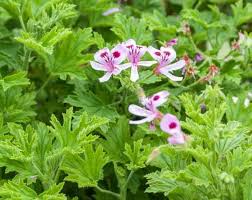 My grandmother’s windowsill was filled with plants that smelled good when you rubbed the leaves. They didn’t have many flowers, but if your leaves smell like lemons, or peppermint, or roses, or peaches, who needs flowers? My grandmother called them scented geraniums.

My grandmother was wrong. The scented geranium—and its cousins, the zonal geranium, the ivy and the Martha Washington—aren’t really geraniums. They’re pelargoniums. That was the name given these tender perennials by the explorers who discovered them growing wild in South Africa early in the seventeenth century. Somebody noticed that the elongated seed case looked like a stork’s bill. So the plant was named for the Greek word for stork: pelargos.

Pelargoniums first showed up in England in 1632, and by 1640, Thomas Parkinson included sixteen different varieties in his comprehensive new garden book, Theatricum Botanicum, which included everything anybody knew about plants.

After that, the pelargoniums really got around, partly because they took root so easily. All you had to do was break off a piece and stick it in water. Sailors who stopped off at the Cape of Good Hope obtained cuttings and pretty soon, pelargoniums were sprouting on windowsills all over Europe and America. Thomas Jefferson found them in France and sent them back to America, where the flourished. And during Queen Victoria’s day, when hot-houses were all the rage, the number of named varieties grew like . . . well, like wild pelargoniums.

But early in the game, the Swedish botanist Carl Linnaeus put pelargoniums in the wrong botanical family–the Geranium family. The family name stuck. Was it easier to say? More familiar? Nobody knows, exactly, but pelargoniums became geraniums ever after.

Growing scented pelargoniums isn’t hard. You can plant them outside in the summer, and move them indoors to a sunny window when it gets cold. There are hundreds of varieties to choose from, and you can use the fragrant leaves in potpourri, tea, salad dressing, jelly, or cake.

But if you ask for pelargoniums when you go to the nursery, you’re likely to get a puzzled look. Better take a leaf from my grandmother’s plant and stick with scented geranium.