Herb of the Year for 2022: Viola (violet, heartsease)  named by the International Herb Association
Birthday Flower for May: Lily of the Valley
May is National Salad Month
Feature of the Month for May: The Notorious Nettle

Week 1
May 2: The first week in May is always National Herb Week, celebrating the special plants that have contributed so much to human lives.
May 5: Cinco de Mayo, a festival honoring Mexican-American culture.
May 8: Mother’s Day. Give your mom a hug. If you’re  not with her, virtual hugs are sweet. So are flowers.

Week 2
May 9: At the 1876 Philadelphia Centennial Exhibition, sassafras-flavored Hires Root Beer was introduced to a thirsty nation.
May 14: About this time, England sometimes celebrates Be Nice to Nettles Week, introducing modern folk to a plant they usually encounter–unexpectedly–only on picnics

Week 3
May 16: May cheeses were traditionally made at this time. A French summer cheese: Nettle Cheese, wrapped in fresh nettle leaves for ripening.
May 19: Canadians celebrate the birthdays of both Queen Victoria and Queen Elizabeth II. Victoria Day is also the unofficial beginning of the warm season north of the border. Canadian gardeners, raise your trowels!
May 20: On this day in 1810, Dolley Madison is said to have served the first ice cream at the White House–strawberry, it is said. Not so: Thomas Jefferson beat her to it, but the myth lives on. For the real scoop, check out this post.

Week 4
May 23: The birthday of Carolus Linnaeus, born on in 1707. A Swedish botanist, Linnaeus helped us keep things straight with his binomial system of plant names.
May 27: Today is the birthday of Rachel Carson (1907), writer, ecologist, and marine biologist. Her courageous 1962 book Silent Spring alerted the world to the dangers of pesticide poisoning.

Week 5
May 30: Memorial Day (originally called Decoration Day) is observed on the last Monday in May. Remembrance is symbolized by the red poppy. 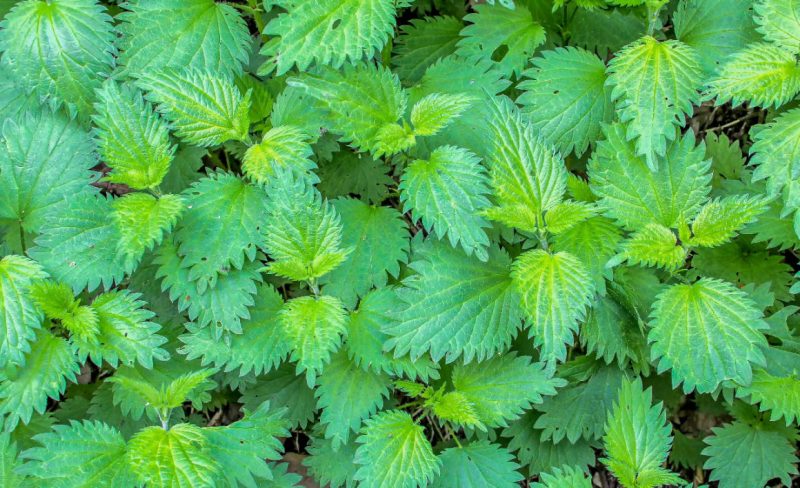 I have eaten nettles, I have slept in nettle sheets, and I have dined off a nettle tablecloth . . . I have heard my mother say that she thought nettle cloth more durable than any other. —Thomas Campbell, 1803

If you’ve been stung by a nettle (Urtica dioica), you probably haven’t forgotten the experience, and you may have avoided this notorious “weed” ever since. But over the centuries, the nettles has been a valuable wild herb.

• The Edible Nettle. The nettle is an excellent source of magnesium, iron, vitamins–and calcium (481 mg in a half-cup, nearly 3x the calcium in milk). The young plants have been used in soups, stews, and as a spinach-like vegetable. In Scotland, oats and nettles were cooked as a porridge, and nettles were used to flavor and color cheese.

• The Medicinal, Cosmetic Nettle. Nettles have been used for centuries to treat osteoarthritis, eczema, prostate problems, and dandruff. The leaves contain a natural histamine that may be useful in treating allergies. And yes, it’s true that the leaves of the dock, which often grows companionably with nettle, contain chemicals that neutralize nettle sting and cool the skin. Nettle in, dock out, as the old saying goes! And nettle is said to make your hair shine and feel thicker and smoother. To make a hair rinse, collect 2-3 cups of nettle leaves (wear gloves!). Cover with water in a non-reactive saucepan and simmer for 15 minutes. Strain and cool for use as a rinse after washing your hair.

• The Fiber Nettle. The nettle contains long, pliable fibers that can be spun and woven to make smooth, supple nettle cloth, or cooked and processed as paper. The leaves are used to make a green dye; a yellow dye is made from the roots.

• The Garden Nettle. As liquid compost, nettles make a great fertilizer. Pick them in spring and pack them into a bucket with a lid, adding one-half gallon of water to each pound of nettles. Let sit for 2-3 weeks, stirring occasionally. Strain out the nettles and put them on the compost heap. Use the liquid as a fertilizer (1 cup nettle liquid to 10 cups water), on container and garden plants. In a stronger mixture (1 cup to 5 cups water), you can use it to spray aphids and black fly. The nettle itself is a food plant for butterflies.

Cows fed on nettle give much milk and yellow butter. Makes horses smart and frisky.
Stimulates fowls to lay many eggs . . . —Constantine Rafinesque (1830)

The seede of Nettle stirreth up lust, especially when drunk with wine.—John Gerard, Herbal, 1633

Fiesta time! Celebrate Cinco de Mayo with a traditional Mole Poblano. (The word mole comes from the Náhuatl molli, sauce or mixture.) Here’s the backstory. There are many complex recipes (with many interesting ingredients.) If you’re short on time, here’s one that’s simpler  and just as tasty.

Root beer the old-fashioned way. The first recipe for Hires Root Beer was very like this one from 1869:

For each gallon of water take ½ oz each of hops, burdock, yellow dock, sarsaparilla [Smilax regelii], dandelion and spikenard roots [Aralia racemosa], bruised. Boil about 20 minutes, and strain while hot. Add 8-10 drops of oils of spruce and sassafras mixed in equal proportions. When cooled to a warm temp add 2-3 tbsp. yeast, molasses 2/3 pint, or white sugar ½ lb. Put the mix into a jar, with a cloth covering it, let it work for 2-3 hrs, then bottle and set in a cool place.

Note: this recipe uses sarsaparilla, which has a taste similar to that of sassafras, a small tree. The FDA banned the use of sassafras after research linking it to cancer. For another opinion on its toxicity, read this post (and the recipe for root beer syrup). And for a fascinating woodland demonstration/discussion of sassafras and sarsaparilla, spend a few minutes with this YouTube video.

Introduce Carl Linnaeus to a budding young botanist in your family. Linneaus was the  scientist who created the system by which our planet’s plants are named. A big job that required a giant intellect–and is now being tested by DNA.

Did you know that strawberries were once used medicinally? Read about it in Mrs. Grieve’s Modern Herbal (1929–not so “modern” now). She includes this charmingly fanciful 17th-century recipe for turkey “enfolded in” strawberry leaves and boiled together with every herb to be found in the kitchen garden.

Gather strawberry leaves on Lamas Eve, press them in the distillery until the aromatick perfume thereof becomes sensible. Take a fat turkey and pluck him, and baste him, then enfold him carefully in the strawberry leaves. Then boil him in water from the well, and add rosemary, velvet flower, lavender, thistles, stinging nettles, and other sweet-smelling herbs. Add also a pinte of canary wine, and half a pound of butter and one of ginger passed through the sieve. Sieve with plums and stewed raisins and a little salt. Cover him with a silver dish cover.

Explore the connection between Memorial Day and the red poppy (Flanders poppy, Papaver rhoeas, aka the corn poppy) in the entry for May 30 in the China Bayles Book of Days.