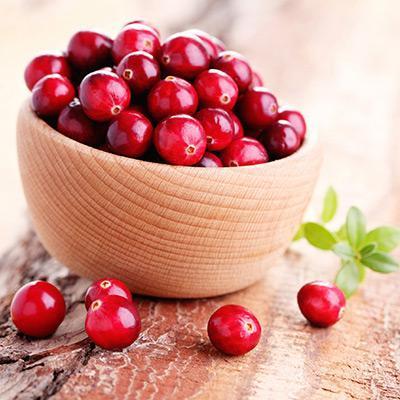 Children can very early be taught to . . . knit garters, suspenders, and stockings; they can make patchwork and braid straw; they can make mats for the table, and mats for the floor; they can weed and garden, and pick cranberries from the meadow, to be carried to market.—Mrs. Child, The American Frugal Housewife, 1828

The cranberry (Vaccinium macrocarpon) is an herb—but you knew that, didn’t you? Native Americans gathered and used the wild berry as a medicine, a dye, and a food. The colonists copied these uses, naming the fruit “craneberry” because the small, pink blossoms that appear in the spring resemble the head and bill of the Sandhill cranes that nested in New England when the first settlers arrived. In 1816, Captain Henry Hall accidentally learned how to cultivate cranberries when he cleared brush from a Cape Cod patch of native cranberries and sand drifted across the acidic peat soil, burying the bushes. To Hall’s surprise, they produced a heavy crop. Now, U.S. farmers harvest approximately 40,000 acres of cranberries each year and they’re usually easy to get—even if your children don’t pick them for you!

The herb has been in long use: native Americans applied crushed cranberries to open wounds and brewed the berries to treat intestinal ailments. To prevent scurvy, a disease caused by a lack of vitamin C, 18th-century American mariners carried a supply of dried cranberries on their voyages. The health benefits of cranberries have become widely recognized as researchers confirm what many have already known: these tart red berries can prevent urinary tract infections and reduce the risk of kidney stones. And recently, a compound in cranberry juice has been found to be effective against plaque-forming bacteria that cause gingivitis and gum disease. If you’re using cranberries therapeutically, choose pure cranberry juice, not one of the many “cocktails” currently on the supermarket shelf.

Cranberries are a tradition on the Thanksgiving table. Here’s China Bayles’ favorite holiday recipe. For more, check out this gallery of tart-sweet possibilities.

Combine ingredients in a large saucepan. Bring to a boil; reduce heat and simmer for about 10 minutes, stirring occasionally, until cranberries pop and sauce thickens. Remove from heat and let cool. Remove cinnamon, cloves, and zest. Chill. About 10 half-cup servings. A zingy, healthful, make-ahead sauce for that special turkey!

Lots to celebrate this month! If you’ve been waiting for China Bayles’ latest adventure, you can read all about Hemlock here. Available in hardcover (for that special Christmas gift), paperback, ebook, and audio.

We know you love sweet potatoes, a traditional accompaniment to the holiday turkey. But you don’t have to smother this versatile vegetable in add-on calories to make it taste good. Cooking light? give these delicious oven-fried sweet potatoes a try. Or how about some luscious sweet potato rolls? Sweet potatoes are loaded with beta-carotene and are a good source of protein, calcium, and vitamins E and A—as well as fiber, of course. They’re an ally in the battle against such chronic health issues as heart disease, cancer, rheumatoid arthritis and asthma.

November 13 is Indian Pudding Day. Here’s the interesting backstory about this traditional corn-based pudding, which came to America via the European colonists. Included: a recipe for your slow-cooker.

On The Great American Smokeout Day, learn about the history of tobacco’s medicinal uses. It vies with the opium poppy for designation as the “deadliest herb.”

Stir-up Sunday? Find out about this traditional British celebration and add 15 traditional (and not-so-traditional) pudding recipes to your collection.

French toast isn’t just for breakfast. Recipes for French toast date back to the sixteenth century. In France, it was called “pain perdu” or lost bread, because it was a way of using lost (stale, unusable) bread. In England, it was “poor knight’s pudding”–a basic, affordable dish that a family with a few chickens and a cow could afford. Here’s a recipe from Tudor times:

To make Poor knights Pudding. Cut two penny loaves in round slices, dip them in half a pint of Cream or faire water, then lay them abroad in a dish, and beat three Eggs and grated Nutmegs and sugar, beat them with the Cream then melt some butter in a frying pan, and wet the sides of the toasts and lay them in on the wet side, then pour in the rest upon them, and so fry them, serve them in with Rosewater, sugar and butter.

For a savory supper, make a meal of French Toast and Ham with Broiled Tomatoes. Tangy with horseradish and mustard, and wonderful with a bowl of hot soup! You’ll find the recipe in the November 28 entry in China Bayles’ Book of Days.

Find out what Susan is up to these busy days by visiting her blog, Lifescapes. There’s always something interesting going on in the Texas Hill Country. She posts book reviews, bookish thoughts, and notes on the fast-changing world of books on her “other” blog, BookScapes.