Week 3. Friendship Week (Rosemary is the friendship herb).
October 18: Today is the birthday of herbalist Nicholas Culpeper, 1616-1654.
October 22: National Nut Day (No, not that kind—think pecans, walnuts, almonds).
October 24: On this day in 1788, Sarah Hale was born.

Week 4. Witching Week (We made this one up, but it fits, don’t you think?)
October 25: World Pasta Day
October 30: National Candy Corn Day
October 31: Halloween! 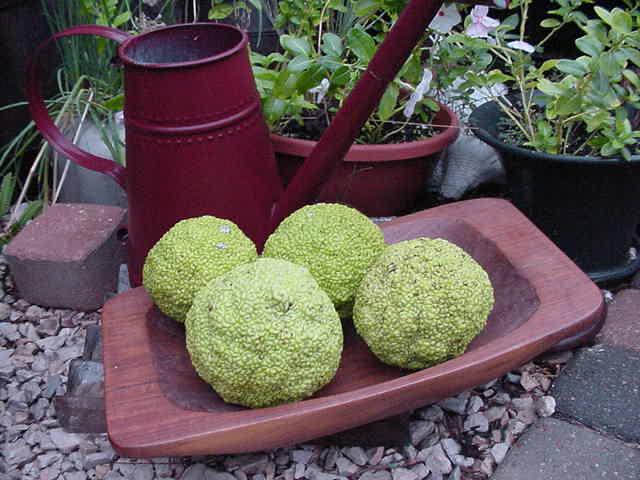 God designed hedge apples especially for the purpose of fencing the prairies.--John A. Wright, editor of The Prairie Farmer, 1850

Our hedge apple tree–the only one we have here at MeadowKnoll–is dropping its large green fruit right now, into the grass at the edge of our meadow. But when I was growing up in Illinois, every hedgerow was full of these graceful trees. And at this time of year, the trees were full of hedge apples, dandy ammunition for the farm boys in our area. The hedge apple fruits are about the size of a grapefruit and heavy. If you’re hit by one, by golly, you’ll feel it for a while.

Native to Texas and Oklahoma, the hedge apple’s scientific name, Maclura pomifera, honors the American geologist William Maclure.  The common name, Osage orange, refers to the orange color of the bark and wood, which was much used by the Plains Indians. The Osage Indians made bows from it, so widely respected that the tree itself came to be called bois d’arc. A well-made bow might bring as much as a horse and blanket in trade. The Comanches made a decoction of the root to treat eye infections, and the Kiowa used the wood to make the staff held by the singer in the sacred peyote ceremony. The Pima used it to tan leather and to make a lovely yellow-orange dye to color basketry and wool. The fascinating process is described on the Folk Fibers blog.  (The photos are excellent.)

When the settlers came to the Plains, they saw the value of the trees for fencing. Planted close together, the trees’ thorny branches formed an effective barrier. The trees have a long life, in part because the wood contains an anti-fungal agent that makes it rot and insect resistant. So when barbed wire began to reshape the prairies, Osage orange was in demand as fence posts—as well as for wheels, mine timbers, and railroad ties.

And one more interesting thing. Humans aren’t the only species to value this large fruit. Scientists now say that the hedge apple evolved during the days of the mastodons and mammoths, when giant megafauna ate the large fruit and dispersed the seeds. You can read the story here. But it’s not true that modern animals avoid them. Our white-tailed deer break them up and eat them off the ground.

My grandmother, who grew up on a Missouri farm in the 1870s, gathered hedge apples and stowed them in the cupboard to keep out the cockroaches. Researchers at the University of Iowa found repellent chemicals in fruits they tested, but at levels too low to be effective. Still, if you have roaches and hedge apples, it’s worth a try. The mastodons are no longer around to enable this tree to reproduce itself, but you can give it a hand. Soak the fruit in water for a couple of days, then break it up. Planted now, the seeds should germinate next spring.

By the way, the bowl in the photo is one of Bill’s projects. It’s hewn from walnut he collected on a trip to Indiana.

If you’ve been waiting for Susan’s latest China Bayles mystery, Hemlock is here! Looking for the recipes? You’ll find them at the bottom of the Hemlock page.

Celebrate Indigenous Peoples Day by exploring Native American cookery. Start with these ideas, then focus on foods that are native to your own region. (And yes, you really can make acorn flour.)

Create your own special celebration of the Roman goddess Felicitas by making a list of the good fortune you have experienced in the past month. If you’re not feeling so lucky, here are a few herbs that have traditionally been considered lucky:

• For Europeans, allspice promoted luck, health, and happiness.
• Romans washed their hands in chamomile before they put down their dinari.
• Chinese folk String nutmegs, star anise, and bits of sandalwood in a lucky necklace.
• Swedes planted hen and chicks (Sempervivum) on the roof to bring good fortune (and ward off bolts from the blue).
• Still down on your luck? Try thyme, rosemary, spearmint, honeysuckle–and cross your fingers.