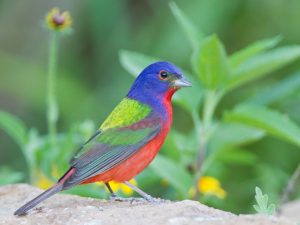 The painted bunting has been called “the most beautiful bird in North America,” and I believe it. He’s certainly the prettiest native bird I’ve ever seen. These birds winter in Mexico and points south, migrating north for the summer. For the past couple of years, at least two breeding pairs have arrived at Meadow Knoll in early April and stayed until mid-September.

The males visit the feeders several times a day, flaunting their bright colors as if they know exactly how beyond-words gorgeous they are. They spill their melodic song from the very top of the tallest tree in the neighborhood. You can hear one singing here. The females are more modest, but during the summer, they’re easily recognizable in bright chartreuse

These lovely creatures were once trapped and sold as caged birds, but (happily) that’s illegal now, at least in the U.S.  Still, their numbers are declining: we humans are destroying their habitat. They’re listed as “near threatened.” (Photo credit: Dan Pancamo, Wikipedia)

It’s been a busy few days here, getting the new website up and working properly. Lots of little glitches to fix, widgets to install, bridges to build between the old sites and the old blog to the new. I’ve appreciated your comments and suggestions. Thank you!

This month: the launch of A Plain Vanilla Murder, China’s 27th mystery. The world was a different place when the first book in that series was launched, back in October of 1992. Online retail hadn’t been invented yet, and mall bookstores, especially the chains, were the Big Thing. I remember my delight when I learned that Barnes & Noble and Borders (remember them?) were actually going to put Thyme of Death on their shelves. And I’ll never forget my first visit to the mystery bookstore in Austin, owned by Jan and Elmer Grape–and to Houston, to Murder by the Book, where the audience consisted of six people: Bill’s mom and dad and four of their friends. The first important review was published in The Herb Companion, introducing China to herb and garden friends around the country–and the rest is history. The books found their readers, and thanks to you, China and I are still imagining the world of Pecan Springs, 27 years later.

And there’s more: Ruby now has her own series. Today is the launch of Out of BODY, the third novella in the Crystal Cave trilogy. If you like them, there’ll be more.

If you’re migrating here from my Typepad blog, you’ll want to subscribe, to make sure you’re notified when I post. (I’m planning to do that more often. It’s more fun here on WordPress, and the posts load faster.) To subscribe, look to the right of this post, where you’ll see a “Subscribe to LifeScapes” box near the top of the page. Just type in your email and it’s done. Easy as pie.

Reading note: “The reason birds can fly and we can’t is simply because they have perfect faith, for to have faith is to have wings.” ― J.M. Barrie, author of Peter Pan

14 comments on “Birds of a Feather”