Briefly, two true crime narratives about the current challenge of keeping libraries safe as the value of their special collections skyrockets and criminal collectors look to them as a source of valuable goodies. 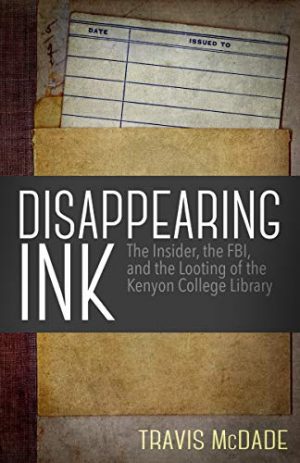 Disappearing Ink: The Insider, the FBI, and the Looting of the Kenyon College Library, by Travis McDade, is the  fascinating story of a criminal whose life-long passion–rare books–lured him into a life of larceny.

David Breithaupt had worked for ten years as Kenyon College Library’s part-time evening supervisor. He was fired when a sharp-eyed Georgia librarian discovered in April, 2000, that Breithaupt was selling a Flannery O’Connor letter on eBay. This discovery led to another: that for the past ten years, Breithaupt had been collecting from the Kenyon College collection, gathering up rare books, manuscripts, and documents in a large-scale, long-term looting.

Author Travis McDade is the curator of rare law books at the University of Illinois and a leading expert on thefts of books, maps, and manuscripts from libraries. He is also a member of the Mystery Writers of America, and he tells the story of Breithaupt’s compulsive collecting with the consummate skill of an experienced crime-writer. Disappearing Ink isn’t exactly a thriller (there’s no shoot-’em-up and the chase scenes are definitely slo-mo). But it is a detailed, meticulous study of a major crime, the shortcomings of library security, and the failures of our justice system. I gobbled it down in a day.

Interesting lines–something I hadn’t thought about:

In general, rare book thieves fall into two categories: those who sell and those who keep. Contrary to popular opinion—which holds that stealing books to own them is somehow less of a crime than stealing books to sell them—the hoarders are the worst. Once a person who steals for his own collection gets a book, it will generally not surface again until he dies. 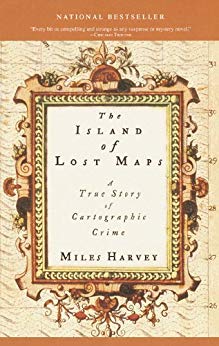 The Island of Lost Maps: A True Story of Cartographic Crime, by Miles Harvey, tells the story of a map thief with the unpromising name of Gilbert Bland, the rare and costly maps he stole, the libraries he stole them from, the dealers he sold them to, and the universe of contemporary cartography. Harvey opens his narrative with Bland’s arrest at the Peabody Library, which prompted a years’-long investigation of thefts spanning North America.

Harvey’s compulsive mapping of Bland’s criminal career (interesting in itself) is interrupted by brief surveys of other thieves, legitimate map collectors, and the histories of various map collections. There are, as well, sorties into the history of map making, the lives of some map makers, and the commercial side of map making and of map collecting. The narrative sometimes feels unnecessarily bulky and digressive, but throughout, Harvey stays true to his pursuit of Bland and Bland’s pursuit of maps. Highly illuminating if maps, cartography, old books, and libraries are your thing.

Interesting passages on the subject of compulsion:

Filling in a life, it turned out, was like filling in a map, and my search for Gilbert Bland soon transformed from an investigation into an adventure . . . Every time some new bit of Blandabilia arrived in the mail or turned up in an archive, I would rush to examine it with a feeling of giddy anticipation, sure that it would fill in some key corner of the map I was trying to create. Often it did just that—but invariably it would also raise new questions, so that as one blank space was filled another would open up, my map becoming simultaneously larger and smaller, Bland both more and less real.