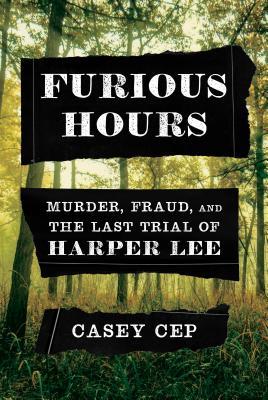 One of the most fascinating mysteries in American literature is the mystery of Harper Lee’s single masterpiece, To Kill a Mockingbird–especially after Go Set a Watchman was published and we realized that there really were no masterpieces tucked away in Lee’s bank vault.

Furious Hours: Murder, Fraud, and the Last Trial of Harper Lee, by Casey Cep, digs deep into Harper Lee’s post-Mockingbird life to show us the reasons for Lee’s inability to write another book: a perfect storm of distracting and distressing celebrity; unrequited friendship (with Truman Capote); agonizing loss (of family, editor, agent, friends); a half-hidden alcoholism; and an investment of precious time and energy in an unpublishable project: a book about the crimes and punishment of Willie Maxwell, a black preacher, fraudster, and con artist who murdered five family members for their insurance money.

Cep’s brilliant book–part true-crime, part biography, part literary criticism–uses the complicated, ironic Maxwell story to demonstrate the kind of book Lee wanted to write. Cep finds that Lee was driven by her interest in the law (so evident in Mockingbird), her desire to one-up her life-long friend Capote (with whom she had worked on In Cold Blood), and her need to prove to the world that she had another book in her. The research that produced Cep’s findings is impressive, and she brings all the disparate pieces together in an elegant prose style, illuminating Lee’s complex, secretive life in ways no other writer has done.

Cep, who grew up on the Eastern Shore of Maryland and earned an English degree from Harvard, went to Oxford as a Rhodes Scholar, bringing home an M.Phil in Theology. In her capable hands, Maxwell’s story becomes the book Lee tragically was not able to write. Furious Hours is an absolutely essential contribution to our understanding of one of the most inscrutable authors in modern American literature. I enjoyed every word of it. And I’ll be first in line for Cep’s next book, whatever she chooses to write about.

BONUS: You can sit in on a free-ranging discussion with Casey Cep on C-SPAN2. Starts about 3:30 into the video. (Thanks to Marjie Podzielinski for the link!)

4 comments on “BookScapes: Review of Furious Hours: Murder, Fraud, and the Last Trial of Harper Lee, by Casey Cep”