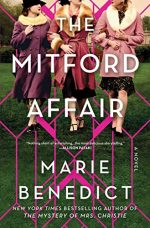 I’m fascinated by biographical/historical fiction. What interests me most about these novels is the complicated challenges they present. They have to meet all the usual requirements for successful historical fiction: an intriguing story peopled with engaging characters and supported by true-to-period details of settings, dress, food, slang, and lifestyle. But biographical/historical fiction has the additional responsibility of being true, more or less, to the lives of its real-life people. This usually means a major research commitment, especially if the real people are well known. Hence (to my mind) the additional challenges, especially when the real people are central characters in the fiction. I’m always interested in these questions: Does the writer choose to work within the life-limits of her characters’ experiences and personality? Or does she change people and circumstance to fit the story outline she has in mind?

Which brings me to Marie Benedict’s latest novel, The Mitford Affair. The book tells the story of four Mitford sisters: the famous and infamous Nancy, Diana, Unity, and Jessica, daughters of a declining aristocratic family who vie for places in British political, literary, and social circles in the two decades between the World Wars. Nancy, a successful novelist, is unhappily unmarried, then unhappily married. Diana, to her family’s dismay, becomes involved in a scandalous and adulterous love affair with the leader of the British Union of Fascists, Sir Oswald Mosely. Unity creates even greater scandal through her quite public and unrestrained admiration for the Nazi cult in Germany and her passionate obsession with Adolph Hitler—even rumored to be his mistress. Younger sister Decca commits herself to the communist cause, but it is Diana and Unity who demand most of our attention. As war looms and these two sisters become deeply involved in dangerous fascist and Nazi activities, Nancy becomes more and more uncomfortable with their choices, until she is finally faced with a brutal choice. Should she share what she knows with Winston Churchill, First Lord of the Admiralty and a cousin-by-marriage? Can she really “steer the course of the world’s future,” as Churchill tells her? At what cost to her sisters?

Benedict has chosen to portray a difficult assortment of characters, allegiances, and alliances in a difficult period. Diana’s and Unity’s self-destructive fascination with and need for powerful men makes it hard to sympathize with the two women. Nancy’s smug, “uppity” skepticism and her failure to actively intervene with her sisters while at the same time satirizing them in her fiction is understandable but unattractive. The tumult and chaos of the political environment may be hard for some to sort out. It takes a reader with a certain amount of historical knowledge and interest to work through these unpleasant people and their complicated stories to a conclusion that is fraught with personal and political ambiguities. The book ends, literally, with a question mark, as Nancy–unsure of her own motivations–tries to understand her choices.

I enjoyed this novel. The physical settings are detailed, interesting, and accurate. The costumes tell us exactly what we need to know about the wearers. The use of first-person narration for Nancy helps to anchor the story’s moral center for us, such as it is. The dialogue sparkles and the events have a compelling logic from beginning to end. Most of all, I admire the novelist for tackling such a difficult subject, for living with its challenges long enough to fashion a story that is fundamentally true to the real people she’s writing about. Benedict does confess to inventing Nancy’s spying episode (the machinery that precipitates the final action), but as she says in “A Conversation with the Author,” she has refused to stray far from the historical record. Writers of fiction can find this kind of self-imposed discipline either difficult or impossible. Benedict manages it here with style, grace, and creative ingenuity.

The Mitford Affair illuminates the labyrinthine social and political milieu of pre-WW2 England and Germany and the lives of people whose loyalties were tested by competing political ideas. As well, it asks us to think hard about the rifts in our families in an era when our own divisive politics threaten to pull us apart. Recommended for readers who enjoy a reading challenge and want to learn more about England and Europe between the wars.

And while we’re on the subject of difficult characters: I’ve recently finished another novel I want to share with you. Wendy Holden’s The Duchess, about Wallis Simpson, the twice-divorced American woman who married the former Edward VIII of England. I’ll post a review of it sometime soon. In the meantime, if you’d like to comment, please join the conversation below.

18 comments on “Review: The Mitford Affair”