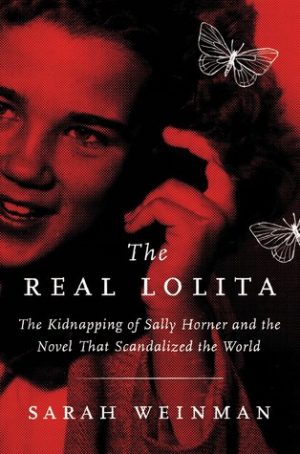 The Real Lolita, by Sarah Weinman

I’m not a fan of Vladimir Nabokov’s Lolita, although I’ve taught it when it was on a college course book list. If I had to teach it again, I would make The Real Lolita required reading. It puts Nabokov’s book into a newly relevant and important context and raises interesting questions about where and how author’s find their ideas and how books “change” over time.

Weinman’s book is a study of the tragic kidnapping and repeated rapes of Sally Horner, the young girl whose real-life story Nabokov found in the newspapers and “strip-mined” to produce Lolita. And then concealed, in an attempt to enhance his reputation as a literary genius whose imaginative work was created sui generis, independent of real world events.

Weinman also helpfully surveys (for those who don’t know it) the history of Lolita‘s publication. Originally rejected by American publishers because of its scatological content, then published by a smutty European publisher and promptly banned in France, the book brought its scandalous reputation with it when it was finally (1958) published in America. All of this furor, while it increased sales and burnished Nabokov’s literary reputation, encouraged readers (and later adapters) to badly misinterpret the book. “Sixty years on,” Weinman writers, “many readers still don’t see through Humbert Humbert’s vile perversions, and still blame Dolores Haze for her behavior, as if she had the will to resist, and chose not to.”

Personally, I have often wondered how far this misreading is a result of the author’s ill-concealed affection for his witty, urbane character, inviting us to understand and even empathize with Humbert Humbert’s compulsion. Weinman points out that Lolita isn’t Nabokov’s first effort to write about an older man’s sexual desire for a preteen girl. She reviews his earlier writings (some in Russian), pointing out that this was a persistent theme to which he returned throughout his career. Given this, she might have more explicitly linked Nabokov to his point-of-view character, Humbert Humbert, and asked to what extent Nabokov reveals parts of himself through Humbert. But that’s another subject entirely, and Weinman wisely skirts it.

The Real Lolita: The Kidnapping of Sally Horner and the Novel that Scandalized the World is fascinating, revelatory, and readable. Kudos to Sarah Weinman for focusing a spotlight on Sally Horner, whose full story, brief as it is, begs to be told. For me, the book takes on a greater poignancy for appearing in the era of #MeToo, when the likes of Jerry Epstein and his rich and powerful friends are on full view in American courtrooms and in American politics.

A bit of my own Lolita research. On page 177, Weinman speculates that Nabokov, collecting butterflies near Afton, Wyoming, may have read about Sally Horner’s death in a “local newspaper” on August 19, 1952, or in a copy of the New York Times. More likely: he read it on August 20, in the Casper WY Star-Tribune, where it appeared on page 11, the sports page. He copied the text of the AP newswire story almost verbatim onto one of his famous note cards–and saved it. The AP headline: “Victim of Sex Crime Killed in Car Crash.” That would have caught Nabokov’s attention.

The paperback edition of The Real Lolita will be published in the U.S. on September 10, 2019. Weinman says it will include an afterword with information that came in a few weeks before the book’s hardcover publication. I’ll be among the first to read it.

Weinman has a long and deep interest in crime fiction, in women’s issues, and in the intersection of both. If you’re interested in her work, you can keep up with her via her blog, The Crime Lady (both free and paid subscriptions).

30 comments on “BookScapes: The Real Lolita”