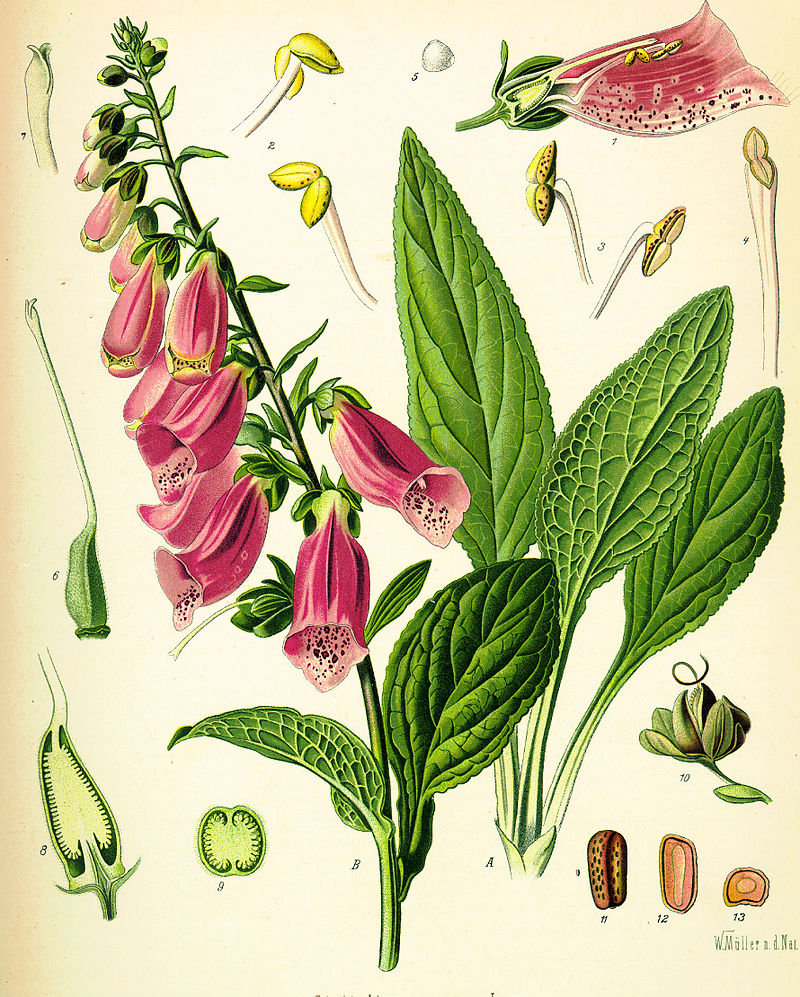 It all started in the English spring of 1768, in the county of Shropshire, when Dr. William Withering rode out to make a house call on Miss Helena Cooke. Her illness confined the young lady to her home and required the good doctor to visit frequently. The two young people fell in love. He proposed marriage and she accepted.

Because of Miss Cooke’s confining illness, the engagement was a lengthy one. She filled the idle hours by painting water colors of plants and flowers. As a medical student, Dr. Withering had found botany exceedingly dull and disagreeable, but his fiancee’s fascination with plants quite naturally charmed him. His medical practice took him on long horseback rides throughout the Shropshire countryside, he got into the habit of bringing back interesting specimens for her to paint. By the time they were married in 1774, Dr. Withering was as passionate about plants as was his new wife.

One subject of the doctor’s passion was the poisonous foxglove, known by its Latin binomial as Digitalis purpurea. The year after his marriage, the doctor acquired a secret herbal recipe from an old Shropshire woman. She had used this recipe, which contained foxglove and other herbs, to treat dropsy—the disease we now know as congestive heart failure. Dr. Withering began to experiment with this powerful herb, administering it in different forms and dosages and taking careful notes on its effect on his patients. He learned that the plant increased the strength and efficiency of the heart muscle without requiring more oxygen. He also learned that the best effects were obtained from the leaves of a two-year-old plant, gathered just before it bloomed.

By 1780, the success of Dr. Withering’s clinical trials encouraged him to recommend foxglove to his fellow practitioners. Five years later, he published his now-classical study, Account of the Foxglove, and many physicians began to administer foxglove. Unfortunately, some of them did not follow Dr. Withering’s careful practices. Over the decades after the publication of his book, a great many people died from the improper use of this herb. But eventually, its administration was standardized, an extract was made, and digitalis—as it was now called—became a safer medicine.

If you use digitalis, you can thank Dr. Withering for making it possible—and you can thank his romance with Miss Helena Cooke for inspiring his interest in plants.

But while you’re enjoying the foxglove in your garden, do remember that it can be toxic. Grow it for its beauty, admire it for its life-saving potency, and give it all the respect it deserves.