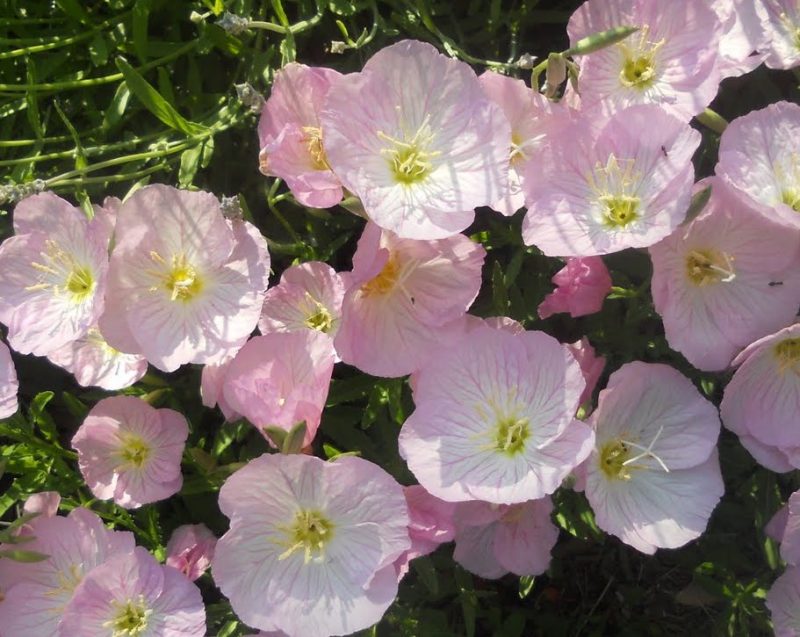 The pink blooms cascading down our creek bank this week belong to the evening primrose (Oenothera biennis). It’s not just pretty, though. It’s an all-around useful plant.

I’ve read that primrose leaves can be cooked like greens–maybe I’ll add a few to the next batch of kale. The roots can be boiled like potatoes and are said to taste like parsnips (if anybody remembers what those taste like). I’ve used the flowers in salads and as a garnish, and steamed the small young seedpods like peas. Some have roasted the seeds (15 min. at 350°) for use on bread or in salads.

But primroses aren’t just a culinary thing. Ethnobotanist Daniel Moerman tells us that the plant has been used for centuries in North America to treat asthma, eczema, heart ailments, and circulatory problems. Modern herbalists used it to treat premenstrual symptoms.

This year, the flowers are everywhere in large pink colonies, and beautiful–a very special blessing after the hardships of February’s long freeze and power blackouts and the challenges of the pandemic.

Life in the country: internet issues. We;ve had a lesson in remoteness recently. We’re on satellite here, and something went awry in that system–on the ISP’s end, not ours. We’ve been on-and-offline for nearly two weeks (mostly offline), and even when we were online, the speed was impossibly slow. I’m sure you can imagine the frustration. Finally, yesterday, after yet another hour on the phone with a tech, somebody at Viasat pushed a button or pulled a lever or said a few magic words. The satellite came on. And hasn’t been off since. We’ve looked into other options, but this is the only one that works in our little valley, ringed by trees, with not-always-good cell service. Fingers crossed that it continues to function.

A family mystery. My brother John and I have been digging into a mystery of paternity that has intrigued our family for decades. We may have solved it, thanks to Ancestry.com and to our traditional genealogical sleuthing. There will always be lots of unanswered questions (Why? Who knew? When did they know it? ). But we’re wrapping up the research now and looking forward to sharing the outcome of our detective work with you. Watch this space.

On the desk, more mysteries. Hemlock (China’s 28th adventure) is currently planned for September release. I’m about 2/3 finished with the next Dahlias mystery: The Darling Dahlias and the Red Hot Poker, set in 1935. And I’m playing with ideas for a possible spinoff of Hemlock. I’m eager to hear what you think of that story when it comes out, and whether you think there’s more to be told.

Reading note: I shall try to tell the truth, but the result will be fiction.–Katherine Anne Porter

34 comments on “In Bloom This Week: Evening Primroses”