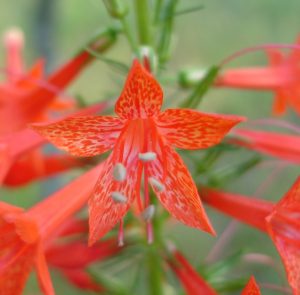 Our native Standing cypress (Ipomopsis rubra) has some other, more appealing names: flame flower, Texas plume, scarlet gilia. A biennial, it grows wild in our meadow. Its ferny first-year growth flourishes in dry, gravel-y soil; if we get good rains, the bloom stalk can grow to five feet or more. Here in the Hill Country, it grows along the railroad tracks between Bertram and Burnet. The tracks aren’t regularly mowed or grazed, so flowers like these can flourish.

If you live in Southeastern third of the country (west to Texas), you can grow this in your garden–easily, too, for the flame flower reseeds itself generously. Save some seeds and share with friends or plant in other areas of your garden. (Start-up seeds are available from Native American Seed and elsewhere.) The hummingbirds and Sphinx moths will bless you. The tubular blooms and these pollinators are made for each other. Naturally.

It’s been a busy couple of weeks, mostly working with my new webwizard, Mark Wiard, who has helped me develop this spiffy new website. This week, Mark and I have focused on creating a new format for “All About Thyme,” the monthly herbal eletter I’ve been publishing since 2006. Peggy, my long-time assistant and webmistress, was a coding whiz, but now that she’s retired (and married and moved to Portugal!), I’m having to learn new ways to get things done. “All About Thyme” will be out on Monday, July 1. If you’re a subscriber, you’ll notice that we have a new look (big thanks to Jen Hancey, at Hancey Design). You’ll also notice that we have a new way of displaying the eletter, thanks to Mark. If you’re not yet a subscriber, now’s a good time to begin.

I’m delighted to announce something that may make you Robin Paige fans smile. The first three books in the series (Death at Bishop’s Keep, Death at Gallows Green, Death at Daisy’s Folly) will be published as audiobooks later this year and early next. Bill and I wrote this series of Victorian/Edwardian mysteries together over a 12-year period (1994-2006). It was recently republished in England, and all 12 are available in both digital and print. Now, having it published in audiobook is a special treat. If the first three books do well, the publisher (Dreamscapes) may publish the rest. You’ll be the first to hear when it’s out.

Reading note. When we save seeds, we are taking history into our own hands. Literally, holding a seed is holding a story that stretches back, sometimes centuries. It’s a story that conjures up over-the-fence seed swaps. It’s a story that speaks to beating the odds, to adaptation and evolution, to finding a niche and holding on tight, just the way a bean tendril does. Seeds also speak of the future, of those untold, unfolded stories, the ones that you and I are shaping this very moment.—Rebecca Pastor

16 comments on “In bloom this week: Flame flower”