The button bushes (Cephalanthus occidentalis) that grow along our little creek are in full bloom just now, their round, highly symmetrical blossoms delighting the bees, hummingbirds and butterflies–especially the giant swallowtails, no doubt graduated from the larvae that completely stripped my dill this spring. No problem, though.  I plant much more dill than I need. And the butterflies need it much more than I do.

The button bush is one of our native Hill Country plants that we modern humans, so oblivious to the real earth around us, don’t fully appreciate. The foliage, stems, and roots contain two toxic glycosides, so those who worry about such things label it “poisonous.”

It is, of course. But the butterflies and hummingbirds don’t know this, and the native people of the Southwest and Southeast understood how to turn its toxicity into an antidote. These glycosides stimulate the digestive system, so they used it–carefully–to treat various stomach, intestinal, and urinary ailments. Different tribes used the plant in different forms: decoctions of the root and stems; teas of the stems and foliage; and poultices of the bark and leaves. The bark was also chewed to relieve toothache. And in its natural habitat, along streams and in wetlands, the roots help to resist erosion and provide habitat for many aquatic animals.

But this little bush is not just an important member of the plant/animal community that makes up our small corner of the Texas Hill Country. Seen from a distance, it’s attractive. Viewed up close, it’s awesomely beautiful, perfect in its symmetry, perfectly suited to the world it lives in. 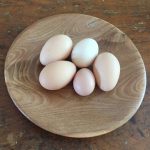 Homestead report: A major chicken event. The younger Girls began laying this week. They’re only about four months old, so this was an unexpected happening–but definitely welcome. There are five: two Barred Rocks, two Buff Orpingtons, and one Rhode Island Red–plus the two older Girls. No idea who laid the baby egg, which had two baby yolks, or whose egg is a lighter color. They’re still practicing. I see omelets in our future. (The beautiful plate is one of Bill’s wood-turning projects.)

Bookscapes. I’ve just launched a new blog called BookScapes, where I’ll be posting book reviews and notes on writing, publishing, and the rapidly changing landscape of the book world. (“Toto, I’ve a feeling we aren’t in Kansas anymore.”) You can check it out here. If you’re one of the many who offered suggestions for ways to organize a second blog, thank you! Your comments were helpful and much appreciated.

Reading note. I decided that if I could paint that flower in a huge scale, you could not ignore its beauty.— Georgia O’Keeffe

11 comments on “LifeScapes: Button Bush and a Major Chicken Event”