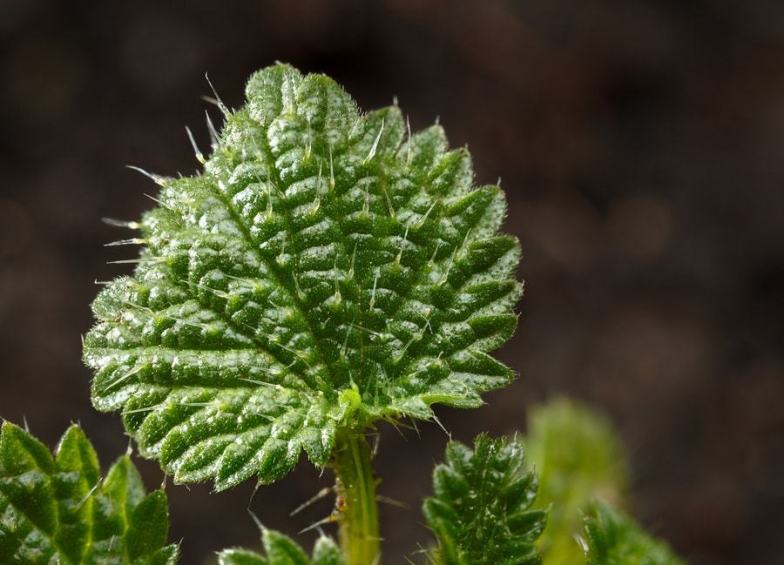 Being stung by a nettle is no picnic. First it bites, then it burns—for a long while. Some nettles can cause death, and all can sting even when they’re no longer alive. When a plant museum was being moved out of London during World War II, a long-dead 150-year-old nettle stem stung one of the workers. That’s persistence for you.

Some etymologists say that nettle take its common name from the Anglo-Saxon word noedl, or needle. Or it might come from the word net, which is derived from a verb meaning ‘to spin’ or ‘to sew.’ Both point to important ancient uses of the nettle plant, which contains thin, flexible fibers–excellent for thread-making..

Before hemp and flax were introduced into northern Europe, nettle was the chief fiber plant. The plants were dried, then soaked in water.  The softened fibers were separated and spun, either on a spindle or by rolling on the spinner’s thigh. (For a detailed description of the retting/spinning process, check out this site.)

A fine-spun thread might be used to weave clothing or bed-linens; a coarse-spun yarn for sacking or sailcloth. Archaeologists are discovering that ancient cloth they thought was linen (made similarly from flax) is really spun of nettle.

And even after flax was available, nettle was preferred for cordage (rope) and fishing nets, for it was stronger than flax, and not as rough as hemp. Eventually, though, flax and hemp won out over nettle as a fiber plant, because both can be grown and harvested more economically. And they don’t bite.

Of course, you can always bite back. In England, young nettle leaves are often cooked and eaten like spinach. In Scotland, they are used in a vegetable soup, and cooked with leeks and broccoli to make nettle pudding. Nettle beer was also a favorite. One interesting recipe calls for a bucket of nettles, a couple of handfuls of dandelions and goosegrass, and ginger.

Nettle is rich in vitamins and minerals, so herbalists recommend it as a spring tonic and blood purifier. The powdered leaves were used to stop bleeding. And even the infamous sting had a medicinal use. Flogging with nettles was an old remedy for chronic arthritis. The nettle may have served as a counter-irritant—easing one pain by causing another. Or perhaps the histamines and formic acid in the stings may have relieved the pain.

If you’re out in the woods and get stung, folk medicine offers a natural pain reliever. Rub those stings with some yellow dock leaves. Perhaps you’ve heard the old saying: “Nettle in, dock out. Dock takes the nettle out.”

And where will you find dock leaves?

The two plants love the same moist woodland, so look around. You might just see a yellow dock, growing near the nettle.