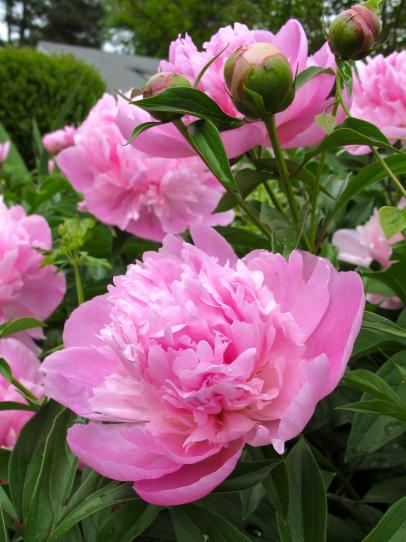 According to Greek legend, the peony began as a beautiful nymph named Peonia. Apollo rather liked this innocent young girl, who was a bit of a flirt.

One day, the two of them were carrying on in their usual bantering way when Aphrodite happened along. The goddess was not amused. She stamped her foot and called Peonia a brazen hussy, a harlot, a strumpet, even. Apollo thought Aphrodite was over-reacting, but he didn’t think it was a good idea to tell her so. Peonia, who hadn’t meant any harm, was so distressed and shamed by Aphrodite’s unjust accusations that she blushed bright red. She was still blushing when Aphrodite changed her into a flower—the plant we know today as the peony.

The Chinese tell a story with a similar twist. It seems that there was a solemn young scholar who admired peonies so much that he planted an entire garden of them, all pure white. He was watering them one day when a pretty young woman appeared and offered her services as a gardener. The scholar was swept away by her innocent smile and charming laugh, and he hired her on the spot. Under her tender care, the white peonies flourished, growing larger and more beautiful than before, while the young scholar—always so sober—learned to laugh and enjoy his garden in a new and delightful way.

One day, the scholar learned that his teacher, a famous monk, planned to drop in that afternoon for a cup of tea. Afraid that his mentor would disapprove of the pleasure he took in his gardener’s company, the scholar hid the girl in a closet while the two men drank tea and discussed academic affairs. As soon as the stern-faced old monk had gone, the scholar ran to fetch the girl.

But the locked closet was empty. She had vanished into thin air. He searched everywhere without success, until he came at last to the garden. There, he saw that all his white peonies were blushing red with the indignation the girl must have felt, locked away as if he were ashamed of her. He knew that her soul had fled into the flowers.

The Victorians, who were in some ways more censorious than the old Chinese monk, associated the peony with the shame of an illicit relationship. According to the elaborate language of flowers that was developed in the early nineteenth century, the red peony’s blush represented the fiery cheeks of a guilty and dishonored nymph. Perhaps for this reason, red peonies fell out of favor with proper Victorian matrons, who preferred to grow pure white ones.

Peonies have been used extensively in both the East and the West, to nourish the blood, treat liver and gall bladder ailments, and control epileptic seizures.