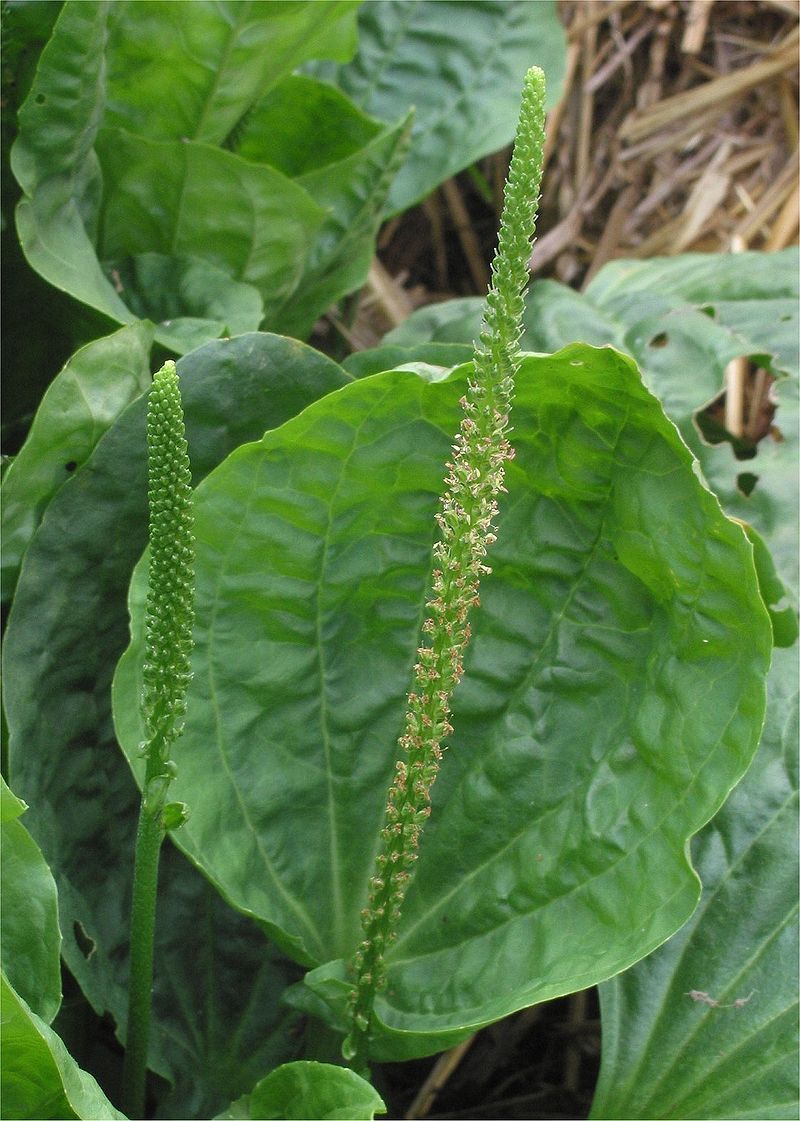 Ubiquitous is right. Around 200 species of plantain (Plantago major) can be found in temperate regions around the world, wherever humans have traveled.

The mythic explanation for plantain’s footloose habit is a romantic one. The plantain is said to have once been a maiden who gave her heart to a wayfaring man. Anxious for his return, she waited faithfully beside the roadway, weeping. One day, the goddess Demeter walked past and heard the maiden’s sad story.

“Well,” she said in a reasonable tone, “if you feel that way about it, why don’t you go look for him?” With a wave of her hand, the goddess transformed the maiden into a small green plantain, naming her from the Latin word for “foot.” And because the plantain would always be underfoot and in danger, Demeter made her immortal. And then she sent the little green plantain on her way, commanding her to follow every road in the world until she found her lover.

The plantain took the goddess’s command seriously. It took her a while, however, to make it to the New World, arriving in the company of more acceptable plants brought over by settlers. As the early botanist John Josselyn observed, native Americans called the plantain the Englishman’s Foot. And Henry Wadsworth Longfellow referred to it in The Song of Hiawatha, where he called it the White-man’s Foot.

When Demeter commanded the plantain to follow every road, she also made her immortal. You may not admire this trait, as you trek down to the garden supply store in search of a weedkiller. But the ancient Saxons considered the plantain’s invulnerability a great virtue. They included the plant among their nine sacred herbs, calling it by the descriptive name way broad. An anonymous tenth-century herbalist describes the plant in language that reminds us of the heroic Beowulf:

And you way broad, Mother of plants
Over you carts creaked
Over you queens rode
Over you brides bridalled
Over you bulls breathed.
All these you withstood
And strongly resisted,
As you also withstand
Venomous and vile things
And all loathly ones
That rove through the land.

So if you’re thinking about spraying something venomous, vile, and loathly on the plantain in your yard, you might want to think again. You could offend the goddess Demeter—and who knows what kind of plant she would turn you into.